He’s a Sexagenarian, you know! 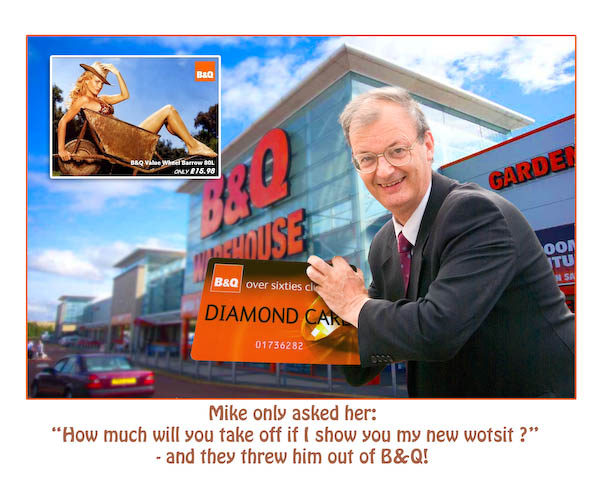 As another poor photographer, he’ll understand that I couldn’t afford to buy him a card. In any case, they simply don’t do one that says: “Congratulations – you can now get an extra 10% at B&Q” !!

I knew I had a shot of him taken at my daughter’s wedding last year – so it was into Photoshop’s Extract filter to remove all evidence of the camera and tripod he was operating and of course, the background.

My own B&Q discount card (yes yes, I’m ancient too!) was scanned and added to the picture. Luckily, only a little bit of pixel pushing was required to make it look like he was actually gripping the card, and little drop-shadow under the hand for added realism.

Rather than drive to our nearest B&Q, a Google Image Search turned up a suitable new background.  Originally used to promote a new B&Q store, the shot was too sharp.   So I duplicated the layer and applied a decent amount of  Gaussian blur.  Then a layer mask was added and filled with a black to white gradient to blend the sharp image with the blurred version to realistically impart the shallow depth of focus you would expect in this type of scene.  Little touches like this all help to avoid the “cardboard cut-out” effect when replacing a background.

The “eye candy” picture is a publicity shot of American actress Molly Simm sitting in a rusty old wheelbarrow. Someone had made this into a mock B&Q advert, which has been kicking around the Internet for the past year or so.

A little added wording and “voila” – the card was complete. All in less than an hour.

Hmmm…. Come to think of it: That was an hour of “work” time, so all in all, it turned out to be quite an expensive Birthday card!

I hope the old fart appreciates it! 🙂