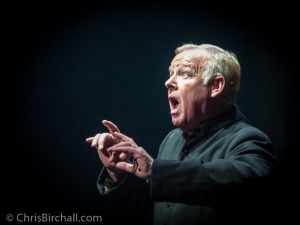 We’ve all done it, haven’t we: Quietly uttering the words “Please God let me win the lottery/pools/bookie-buster”.

In this instance, the imaginary friend targeted in Father Aherne’s prayers was not God, but the little-known ancient Italian apostle, Saint Cajetan, whose Italian accent was decidedly scouse.

And it was just as well really, because actor Jake Abraham does scouse far better than he does Italian! 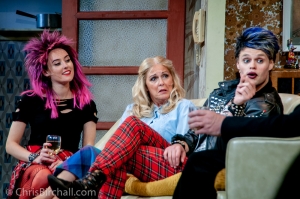 This brand new play by Gerry Linford is deeper and a little less slapstick than the usual Royal Court comedies. Not being a musical also meant it relies more on the quality of the script and its execution by the cast. On both counts it succeeded magnificently, fully justifying its position as a finalist in last year’s Liverpool Hope Playwriting Prize competition.

Set in 1978, it turns out that Father Aherne (played by Les Dennis) had been praying for a turn-around in his fortunes, and the all-seeing saint obliged by foretelling the World Cup football scores. This sent the wayward priest scurrying off to the bookies, with the laudable intent, of course, of using the ill-gotten gains for purely philanthropic purposes. Ahem …of course. 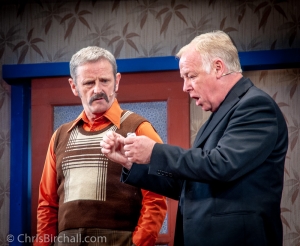 He teamed up with the down-on-his-luck Terry (Andrew Schofield) and his wife Marion, played by Catherine Rice. And following the standard farce format of secrets kept and misunderstandings exposed, the story unfolds with some fine comedy, led by the king of comedic timing and master of facial expression, Andrew Schofield.

Schofield’s real life son Bobby was playing alongside his dad for the first time, in the role of Jamie, boyfriend of Terry’s daughter, Bella. It is plain to see from where this young actor inherited his acting skills. He and Katie King perfectly portrayed the typical teenage pairing of that era.

The Miracle of Great Homer Street is a very funny play that also has it’s moments of sentiment and solemnity. It runs until the last day of June, and is a must-see for Royal Court fans.