The Moon and Mars – but it’s a Flake! 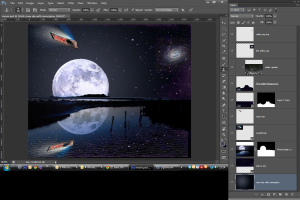 There was so much being bandied around on Facebook tonight about the fabulous moon and the fact you could clearly see Mars just above it too, that I felt I really should get involved.

Now one thing that I am not, is an astrological photographer.  I have a friend who’s just built an observatory in his back garden, but he lives fifty miles away.  He’s got all the gear, right down to the super-duper (technical term) telescope on a plinth set in three feet of concrete, and an electronic tracking device to take the rotation of the earth into account.

It’s all good stuff.  And I’m certain he will come up with some superb shots.

So I’m thinking:  Half the people on Facebook who reckon they have seen Mars, probably didn’t so I decided to do a quick mock-up to show it clearly. 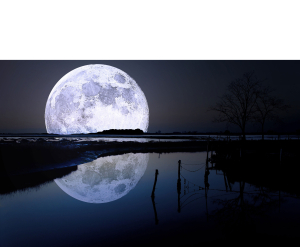 First I found a lovely Moonscape, author unknown, on a royalty free desktop wallpaper site.  The moon was right at the top edge of the frame so I extended the canvas in Photoshop to make room for “Mars”.  I did a quick selection of the sky and masked it off with a layer mask.  Then, having sampled the darkest and lightest areas of the original, I created a new sky on a blank layer beneath it using the gradient tool with a circular gradient to replicate the moon’s glow.

Using Google’s “Labelled for reuse” search, I found a starry sky which I added to the masked area and set the layer to “lighten”.  I did the same with the Comet Trail  and Milky way layers.  The Mars Bar shot had the white background removed and was distorted using Photoshop’s Transform tool to give it the perspective of an object flying toward you. Similarly, the Milky Way bar logo was cut out, but with a soft feathered edge, and dropped into place with reduced opacity. 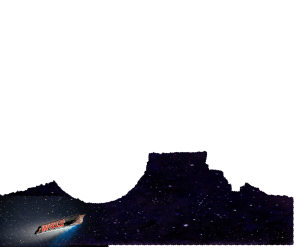 The Moon was already reflected magnificently in the water but I would need to add the reflection of all the other elements.  First I made a selection of the water area using the Quick Select tool and saved it.  Then I created a copy of all the new sky elements by copying and merging the relevant layers.

Next I created a layer mask on this new sky layer by reloading the saved selection and clicking the mask icon.  By unlocking the mask from the layer proper, I was able to select and then vertically transform the sky layer and drag it down so that the sky appeared to be reflected in the water.

I then used the ripple filter to distort the reflection of the Mars Bar.  This still didn’t look right, so I found a royalty free image of light reflected on rippling water and overlayed this image  on the masked water area experimenting with the blending modes and opacity to get the right effect.

So there we have it.  A bit of fun in my warm man cave whilst everybody else was outside shivering and attempting to find Mars with their 200mm lenses.