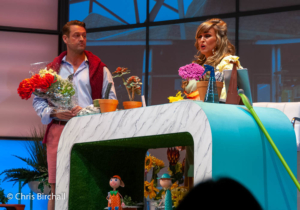 As the curtain rose on an impressively modern minimal stage set, I wasn’t sure quite what to expect. The Royal Court has a penchant for scoused-up parodies of famous classics, and we’ve seen some crackers over the years. Zany musical comedies where the laughs are derived as much from the rewritten song lyrics as from the dialogue.

Having read the pre-show publicity, it was the bracketed words in the line “…takes on another classic with their own (non-musical) version of My Fair Lady” that had left me wondering. 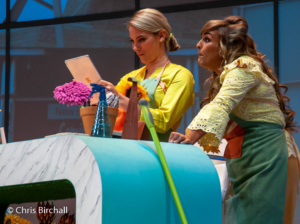 It was a somewhat gentler comedy than we are used to, with a lower “granny will be offended” score than is customary at The Royal Court. It was less of a raucous farce and more of the conventional style of comedy that you would expect to see in the more conventional theatres.

That said, I did enjoy the play. Once I had put my disappointment at the lack of music aside, I found myself really getting into the story which is a sort of reverse parody of Pygmalion. The modern-day Eliza character, Lizzy, is already “a lady in a flower shop”, which is convincingly located in Liverpool One thanks to some slick back projection. She is already well-spoken and the plot revolves around getting her to speak scouse to gain acceptance, and ultimately an inheritance, from the McDermot family. Actress Jessica Dyas carries off the role to perfection as does Helen Carter, who plays her fluent scouse-speaking assistant florist Steph. 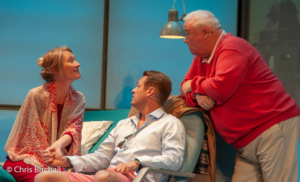 As well as the comedy, there were moments of poignancy revolving around the imminent demise of the ailing Mary McDermott, played by Julie Glover.

Danny O’Brien puts in a fine performance as Mary’s son Higson, who is vying for the hand of Lizzy, whilst Matthew Walker was kept busy alternating between three roles throughout the show.

There was a touching whilst very funny scene where the dementia-suffering Alf McDermott (played by Michael Strake) was making a creatively ad-hoc pan of scouse in the kitchen. Although I was left feeling that Michael Starke wasn’t given enough to do – but only perhaps because he is such a larger than life actor whom I am used to seeing in more prominent roles. 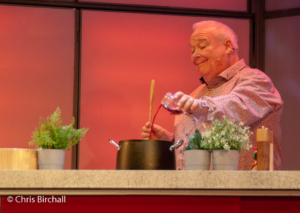 It was good to see, once again, the theatre’s recently restored revolving stage being put to good use with clever and slick ‘live’ scene changes.

Would I have preferred this to have been a musical? I’m not sure. As it is, it is a fine play with lots of laughs and a good, if not predictable, storyline. Well worth going to see for an enjoyable evening’s entertainment.

I’m not going to ‘give it foive’ but think it’s well worthy of four stars.

My Fairfield Lady runs until May 25th.