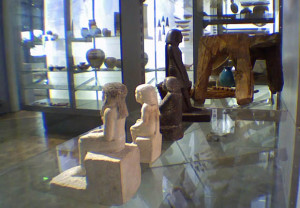 Okay. Imagine for a moment that you are thousands of years old and life had been pretty damn boring up to now.

Things seemed to be looking up when you were adopted back in 1933 until your new mum and dad locked you up in a glass case.

The most fun you’ve had over the last 80 years is having a larf at the changing fashions of the people who visit you.  Visitors who don’t talk to you, they just gawk.

So, as a way of livening up your 3,813th birthday, you decide to give them something to talk about.  You turn around and show them all your backside!

Now this is no mean feat when you consider young Neb is made of stone.

But this is exactly what this ten inch high Egyptian started doing just five weeks ago, baffling the curators at his current “home” in the Manchester Museum.

At first they thought that maybe one of the key-holders was opening the locked glass case and turning him around, so they set up a CCTV camera to record seven days in the life of the bored sculpture.

To their amazement they found the Neb-Senu was, entirely under his own volition, slowly turning himself around a full 180 degrees.  But only during the hours of daylight.  It appears even statues need their beauty sleep!

Sceptics have come up with all sorts of theories about vibrations from traffic and footfall but all have been debunked because essentially nothing in the immediate environment has intrinsically changed over recent years.

I think I have the answer however:  Quite simply, the poor sod is hungry!  He’s gagging for some Kahk or Koshery!  He turns around, not to do an Egyptian moony, but more in the hope someone will read the inscription on his back that translates as requesting an offering:  “…consisting of bread, beer, oxen and fowl”.