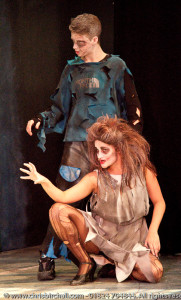 Sitting through last night’s offering at the Royal Court Theatre was an absolute nightmare!  It was however, the very best, zaniest, funniest “nightmare” I have ever had!  So much so, that I can’t wait to do it again.  It is pretty much a certainty that during the next six weeks Jayne and I will be sitting in those stalls at least once more – as bona fide members of the audience rather than reviewers!

The dream team that put together Nightmare on Lime Street is writer Fred Lawless and director Ken Alexander.  It is the fourth play written by Fred for the Christmas season at the Royal Court, each in the pantomime style yet offering so much more.  For a start, unlike regular pantomimes, these plays are not re-vamped traditional stories, they are original down-to-earth scouse comedies.  They are also fantastic musicals featuring songs we know and love reworked to suit the plot under the creative direction of resident musical genius Howard Gray.  People are still talking about “Merry Ding Dong”, “Scouse Pacific” and last year’s “Little Scouse on the Prairy”.  Nightmare on Lime Street is destined to be remembered with the same affection. 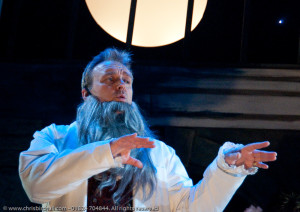 The plot is based around the infamous Doctor Frankenstein (Mark Morghan) who, in a vault under 19th century Liverpool’s Lime Street Station, created a Monster before inadvertently consuming a draft prepared by his side-kick Egor (played by Lenny Wood).  The draft put these three evil-doers to sleep for 150 years only to awaken in 2012 hell bent on inflicting terrible things upon the city.

Mark and Lenny are no strangers to the Royal Court stage.  Neither are the rest of the actors – but with one exception.  Cast in the role of The Monster is none other than American actor David Gest who will be fondly remembered for his 2006 appearance in “I’m a Celebrity Get Me Out Of Here”.

Sadly, Mr Gest was taken ill two days before the show opened, so for the first week of the show’s run his shoes were filled at the eleventh hour by Merseyside actor Anthony Watson.  Not only did Anthony perform flawlessly after such a short rehearsal time, he plays a very convincing monster and an equally convincing David Gest!

The three villains of the peace also had a quartet of Zombies on their side, played by Alicia Forrest, Niamh Fitzgerald, Olivia Galvin and Joe Slater plus the evil Voluptia, played by Lindzi Germain, adding to the enormity of the task facing Paranormal Investigator and Ghost-Buster, Tommy and his daughter Julie. 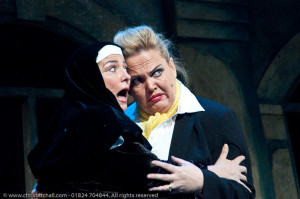 Completing the trio of good guys was the inebriated nun Sister Sledge,  and as they proceed to save the world – or Liverpool at least, which let’s face it is almost the same thing – it becomes obvious that they would stand strong, almost as a family.  And no wonder, because Michael Starke (Tommy) and Lynn Francis (Sister Sledge) are husband and wife in real life and Jamie Hampson (Juile) is their daughter!

Full credit must go to the casting directors for selecting an incredibly talented team, each admirably suited to their characters. Mark Morghan in his scheming evil role and Michael Stark as the loveable bumbling buffoon; both actors cut their teeth on Brookside and have a string of TV credits including Coronation Street, the Bill and The Royal.  Lindzi actually plays two characters – the present day station manager and the latter day vampire-like vamp Voluptia who has the voice of an angel and a heart of stone. Her TV credits include Emmerdale, Prime Suspect and Lynda le Plante’s Above Suspicion.  Scouser Lynn has worked continually in TV, film and Theatre since graduating from Sandown Collage and is well known for her many appearances at practically all the Merseyside Theatres. 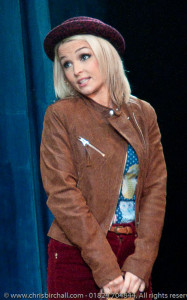 In fact all the actors have an impressive list of theatre appearances, including relative newcomer Jamie Hampson who is following the family tradition since graduating from the Liverpool Institute for Performing Arts with a BA (hons) degree in acting.  Added to that, she has a beautiful singing voice – and it must be said, is very easy on the eye too!

Nightmare on Lime Street is the perfect night out for the festive season and if you only go to see one “panto” type show this year, this should be it.  It has a crazy plot, packed with zany humour and brilliant one-liners, well choreographed dance sequences and uplifting songs – with a “real” four-piece band in the pit!  It runs until 12th January and tickets are available from £13 from the box office: www.royalcourtliverpool.co.uk

Three in a Bed A new place for my rambling thoughts