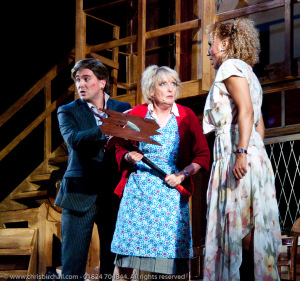 I can’t believe I watched the same play three times last night. What’s more surprising is that each time was even funnier than the previous!

Noises off is a play about a play.

The curtain rises on the rather disorganised dress rehearsals for a fictitious play called Nothing On. It is obvious that everyone is ill prepared and that there is some tension amongst the cast.

There are primadonnas, a drunk, a dimwit and at least one love triangle.  Altogether a classic recipe for disaster. Nevertheless, the show must go on… 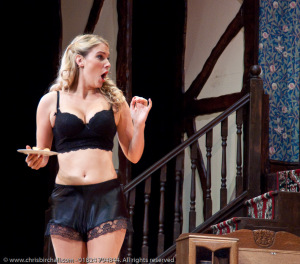 For the rest of Act 1 , we are treated to a good old-fashioned bedroom farce, full of the obligatory doors opening and closing, lots of innuendo, several ‘trousers around ankles’ moments and ladies dashing around in their underwear.

It is a funny farce, full of laughs, and it is only when the odd thing goes wrong that you hark back to the opening snippet of the ‘dress rehearsal’ that you remember that this is a play about a play.

Then after the intermission, the curtain goes up to reveal that the scenery has been turned around! the whole of Act 2 is set backstage.  In the storyline, the play is now well into its run and the cracks in the relationships between cast members have widened. 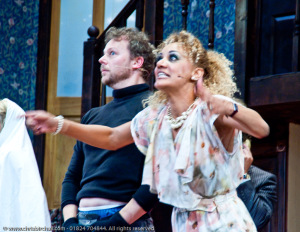 The hilarity that ensues is fantastic.  The fact that the actual storyline is still fresh in our minds from the first half, makes it even more fascinating to watch the ‘in-and-out-of-doors’ action from behind the scenes.  And as more is revealed about the fractious relationships, so much more about what happened during Act 1 begins to make sense.

And as the curtain comes down to a rapturous applause you start thinking “I can’t wait to get home and tell everybody about this fabulous play. 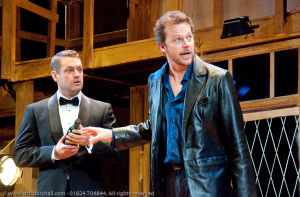 But wait… Instead of the auditorium lights coming up, one of the actors steps out in front of the curtains to introduce… The Play!

The storyline decrees that the play ‘Nothing On’ has been touring the country and is about to open at a northern theatre called  ‘The Royal Court’ in Liverpool!

As the curtain rises on Act 3, the scenery is revolved to once again show an audience-eye view of the stage.  You find yourself wondering were all this is going to go from here.

Well folks, Act 1 was funny enough and Act 2 was side-splittingly funny.  But what you are about to witness in Act 3 is nothing short of comedy genius.

By now the cracks in the relationships have widened into great gaping chasms.  The drunk is even drunker and the director has joined him, the dimwit is even dimmer and everything that can go wrong, does so in epic proportions.

Half the cast appears to have given up on ‘Nothing On’ whilst the rest were desperately trying to hold the thing together.  I loved the “Basil Fawlty” moments they tried to pretend that the ‘mistakes’ were part of the script 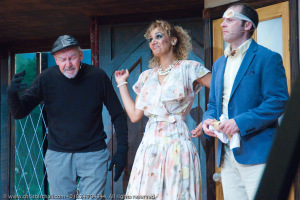 In presenting his cleverly written play by Michael Frayn, The Royal Court needed a brilliant director; one who could pull off the illusion of utter chaos in a truly believable manner. Enter Bob Eaton.

They were all stars.  To call them talented actors seems a little cliched when you consider how brilliant and hysterically funny they were.

This was classic farce at its very best with a funniness factor way off the scale. I can never before remember a time when I have been taking photographs with tears of laughter rolling down my face!

This one really is a must-see!

Noises Off is on at The Royal Court until October 4th.