Oh my Lorde – she’s been Photoshopped!

Photoshop has come a long way since its humble beginnings back in 1987, when University of Michigan  PhD student Thomas Knoll began dabbling with code to display pictures on computers.  As it evolved, he named his program Photoshop and it was snapped up by the Adobe corporation who released it to the world in 1990. 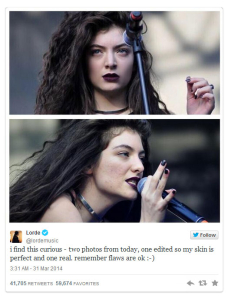 Since then it has blossomed into the most comprehensive image editing program in the world and is used by millions in the photographic, publishing and graphic arts related industries.

What I find sad is that today the name has become almost a derogatory term.  “Oh you can see that’s been Photoshopped!”  It seems to become a victim of its own success.  Or at least a victim of the over zealous and under experienced users of this truly magnificent program.

It is almost the same as the way rising stars use the paparazzi to boost and enhance their celebrity as they climb the ladder, then curse them for invading their privacy.  There was a time some of the “prima donna” models would insist on having their photos retouched before they were published, many are now insisting on the opposite.

i find this curious – two photos from today, one edited so my skin is perfect and one real. remember flaws are ok 🙂 pic.twitter.com/PuRhxt2u2O

One of the latest celebrities to speak out against the use of Photoshop is Grammy-winning pop singer Lorde.

In this tweet on the 31st of March (above) , she showed the difference between a retouched photo and a straight photo of her taken during the same show, posting both photos with the comment “remember flaws are ok :-)”

Personally, I am all for retouching – so long as it is not overdone.

If the subject matter is a real person and the photograph is intended to represent that person, then I’m all for portraying them in a good light.  Taking away blemishes, shadows under the eyes etc., is absolutely fine by me.  After all it is something that has been practised by professional portrait photographers ever since the very first portrait studios came into existence. They used traditional, methods of retouching and air-brushing.

Unfortunately, putting the power of Photoshop in the hands of the new generation of “retouchers” is a bit like giving the keys to a Ferrari to a 17 year old who just passed his test.  You just know there will be a crash!  Not satisfied with simply removing skin blemishes, they seem to want to take Photoshop through all the gears on every single journey. Legs become longer, waists trimmer and boobs bigger – to the extent it no longer truly represents the real person.

…And before anybody cites the fact that I have turned people into mermaids and ordinary people into “calendar girls” (and boys!) I’m talking here about regular photographs.  When it comes to fantasy pictures – well, anything goes!

What are your views on retouching?  Let me know in the comments section.

The Cello. Not quite as boring as you thought Special Measures – Review