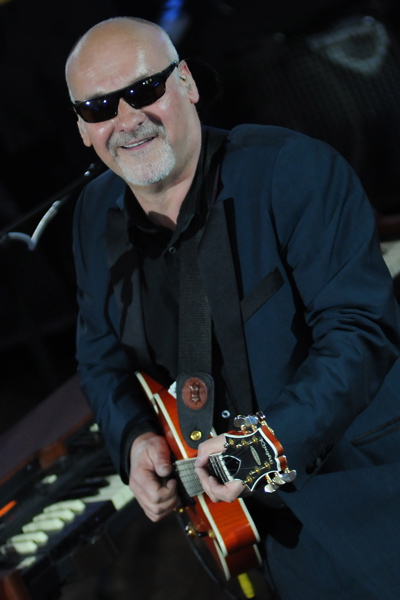 I’ll be perfectly honest, Paul Carrack was not someone I particularly followed, nor even knew much about.  It was after watching a Channel 4 documentary “The Man with the Golden Voice” that I sat up and took notice.  I listened to a few of his songs on YouTube and Spotify and then forgot all about him again.

And then Jayne spotted the fact he was appearing at the Philharmonic in Liverpool.  We love that venue, so we went on line to buy tickets.

Sold out!  Ah well, never mind. But then we noticed he was also appearing at Venue Cymru in Llandudno. Not a venue I particularly like, but hey, let’s do it.

The gig was last Saturday and even though we’d bought the tickets some months ago, we almost didn’t go because our son Isaac was playing at a fund-raiser in our home town.

In the end I was glad we did go and I discovered just how many Paul Carrack songs I knew without realising!

Yes there were the classics from his short stint with Mike and the Mechanics.  The instantly recognisable Living Years and Over my Shoulder,  which went down a storm with the Llandudno audience of Carrack devotees, But then I realised just how many others he had either written or been involved with in some way or other.

He performed Love Will Keep us Alive, one of my Eagles favourites from the mid nineties that I hadn’t known he had co-written Jim Capaldi and Peter Vale.  He gave us Tempted from his days with Squeeze and songs from his recent albums including Should I Fall Behind, made famous by Springsteen; Bobby Blue’s If Loving You is Wrong.  and Brenda Lee’s Losing you.

And when he performed How Long Has This Been Going On he suddenly acquired close on a thousand backing singers!

For my taste, Paul Carrack falls just on the right side of “middle-of-the-road” but I have to say I thoroughly enjoyed the concert he put on at Venue Cymru.  His kindly and jovial personality was very evident and he proved himself as a talented and accomplish musician, moving seamlessly as he did between keyboards and a whole string of guitars, often playing both within the same number.  At one stage he picked up a hand-held Melodica adding yet another dimension to the sound produced by his seven piece band.
Paul Carrack’s forthcoming Tour Dates

Special Measures – Review The Moon and Mars – but it’s a Flake!