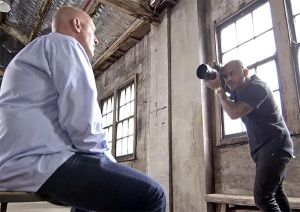 I’ve always been a “people photographer” preferring to photograph faces to trees, bodies to landscapes.

When I was a press photographer, working mainly on features, it was my job to tell a story in a single picture, or a series of pictures, that would correlate with the words that would be written by the feature writer I was working alongside.

Later, when I became a portrait photographer, it was my job to create a flattering image of the person before my lens. The whole idea was to make a sale and my customer was the person in the picture. Flattery was paramount.

Now I have retired, I think I need to start creating proper portraits again.  By that I mean images that portray the person. Not flatter or search for their most photogenic features. And not “tell a story” in the journalistic sense either.

The word portrait means, quite literally “to portray”.  To do that you need to discover something about the person and bring that out in a photograph. Much in the same way an artist does during the much longer time frame they have with their subjects.

I think I might enjoy working without the commercial restraints and get back into exploring the art of people photography much as I did as a young enthusiastic amateur.

I’ve just found this video that explains what I am wittering on about in just three minutes far better than I can put into words.