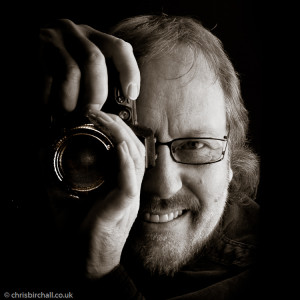 Chris Birchall is a photographer, writer, reviewer and musician.  Having retired from the stresses of press and magazine photography and latterly the even more stressful wedding photography, Chris is now devoting more time to the other items on that list, especially music.

He once listed his favourite pastimes as “Drinking coffee and growing hair”,  adding “And I can do both at the same time you know.  Multi-tasking!”

In reality, Chris doesn’t like to let the grass grow under his feet.  He is currently helping his wife Jayne run a Folk and Acoustic Music Club and is still happy to (selectively) take on the odd photographic commission that might come along.

Chris has always fostered a love of the theatre and was disappointed not to have been able to do more during his press days.  Now, as a reviewer, he is able to combine his love of the stage, writing and photography and can often be seen working in the shadows during dress rehearsals at many of the Merseyside and North Wales theatres.

Chris can also occasionally be seen in front of the audience.  Back in the late sixties and the seventies, he was singer and bass guitarist in the rock band The Executioners, playing many of the Liverpool clubs during their heyday, including The (original) Cavern.  The intervening years were filled with “proper” jobs and raising families and only occasionally did he pick up his old Eko acoustic to strum for his own amusement.  Until recently, that is,  when his affair with strings was rekindled.  Now he likes nothing better than to blast out a Dylan number or two on the folk club circuit – and of course songs from the Stones, Beatles, Cash and others of that era including his favourite singer, Willie Nelson.