Psychic Sybil at The Theatre Royal 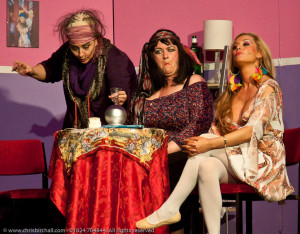 What better way to kick start the bank holiday weekend than a night out at the theatre for a rip-roaring comedy?

And with cast list that includes five of the funniest ladies on Merseyside, you don’t need a crystal ball to tell you it’s gonna be a good one!

Written by Lynne Fitzgerald, who also takes the title role, Psychic Sybil is the tale of two rival stage psychics. 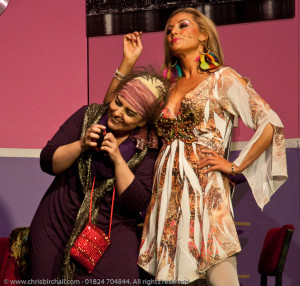 One is the beautiful newcomer Psychic Shirley who’s powers are as fake as her tan, relying on information relayed by radio to a crackling earpiece by her crackpot sidekick Anne.

Played by Suzanne Collins, Shirley attracts her audiences more because of her electric personality than any real psychic powers and by pouring herself into a dress so low-cut it serves as a more than adequate distraction from the offending earpiece!

The other is a “real” psychic.  Oh yes she is.  She really is!  Sybil actually talks to dead people.  She communicates with them through the spirit guide she has constantly by her side in the ghostly form of the cheeky scouse spirit Maggie, brilliantly portrayed by Phillippa Goodwin.

It is such a shame that only those with special powers can see her because, just as Shirley is the eye-candy of stage psychics, so Maggie is the sexy babe from beyond the grave. True, she has an attitude problem, but then she has spent a long time in limbo pandering to the needs and wants of the cantankerous Psychic Sybil! 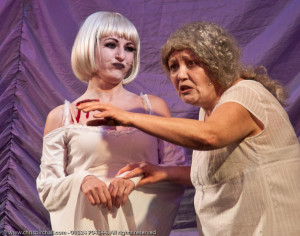 Bang on cue, one such ghost enters the auditorium in the shape of the hapless Maureen.  Actress Bernie Foley gave a wonderful insight of what it must be like to be recently deceased and in limbo, via an intense heart-rending monologue that actually complimented the show’s zany humour beautifully.

On the subject of zany humour, the performance that stole the show came from Lyn Frances who put her own unique stamp on the character of Shirley’s sidekick Anne. Obviously obsessed with her mentor, the dippy Anne was forever fawning over Shirley, stroking her feet, licking everything she touched and even nestling her head in the psychic’s ample bosom! 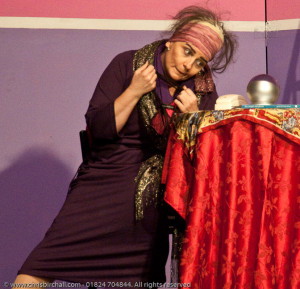 So funny was her performance that she even managed to “corpse” (pun intended) the show’s creator and writer, Lynne Fitzgerald at one point, much to the delight of the audience!

Lynne herself, as always, gave a brilliant portrayal of the lead character. Her expressions, accents and the delivery of the funniest of lines never fails to please.

The show concluded with a hilarious twist …but I’m not going to tell you about that.  Instead, get on the phone now and book your tickets for one of the two remaining shows.  Tonight (Friday 3rd May) or for the final performance on Saturday.  You will NOT regret it!