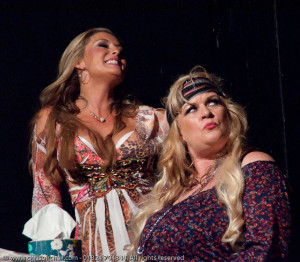 Some things are very predictable: It’ll go dark at night;  it’ll rain in the summer;  Gordon Ramsey will swear and  Noel Edmunds will be on the tele at Christmas.

The list goes on and on, of course, but rising rapidly into pole position on that list is the fact that any comedy written by Lynne Fitzgerald will leave you with aching sides.

Don’t get me wrong.  It is the outcome that is predictable, not the content.  Far from it: Desperate Scousewives (the play) for example, was very different type of comedy from Four Girls in a Caravan. Both were side-splittingly funny.

When I heard that Lynne’s latest play was to be called Psychic Sybil, no crystal ball was required – I just knew that an evening of fun and laughter was on the cards. 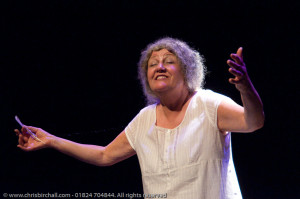 It didn’t disappoint. But it went far beyond that too.  This play about mediums and psychic fakery also delved deep into the heartache and false hopes that stage psychics can inflict upon their audience. This was admirably spelt out during a brilliant heart-rending monologue by Bernie Foley who played the recently deceased Maureen.

The story revolves around the rivalry between two psychics, the long established Sybil, played by Lynne Fitzgerald, and a newcomer – the well connected (via a radio link!) stage medium, Psychic Shirley. 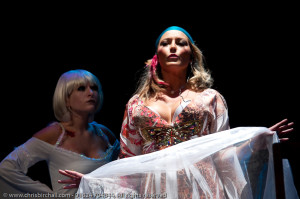 Played by the talented and beautiful actress Suzanne Collins, Psychic Shirley’s tactic was to pour herself into a low-cut dress in such a way that anyone looking for the wire to her earpiece would experience difficulty  seeing beyond her curvaceous cleavage!  The character she was playing might well have been a fake but there is nothing fake about Suzanne!

On the other end of that radio link was Shirley’s assistant played by Lesley Butler who gave us some magical moments of comedy as the pair played out the same kind of trickery that Princess Diana’s former psychic Sally Morgan was accused of in real life around this time last year!

Lynne’s portrayal of the title character was nothing short of brilliant.  She is an actress with a million wonderful facial expressions – a photographer’s dream – and she pulled several out the bag for this performance. 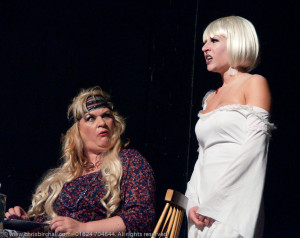 This is a fantastic comedy interspersed with some sensitive and poignant snippets of drama, not to mention moments of rough-and-tumble as the rivalry between the psychics becomes violently physical!   In fact, that particular scene reminded me of when Lynne and Suzanne recently stepped outside of the comedy area with their performances in the award-winning drama, Catfish Therapy.

When Psychic Sybil hits the bigger theatres, as it almost certainly will, make sure you are one of those people who can say “I saw it when it first premiered at the Actor’s Studio Theatre”

WAG – a Musical Catfish Therapy at the Floral Pavilion