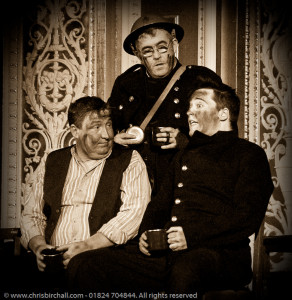 Whilst that phrase has been historically coined for Sailors and Shepherds, and now borrowed by me for a theatre audience, a red sky at night was something very sinister during the war years.  It gave rise to feelings of foreboding and most certainly not delight.

This was the emotive subject of Jo Mac’s drama Red Skies that ran at St Georges Hall in Liverpool over the bank holiday weekend.  Marking the the 72nd anniversary of the Luftwaffe’s pounding of Liverpool in the 1941 May Blitz , this powerful drama celebrates the community spirit and pays homage the debt we owe to those who fought the enemy and those who fought to keep a semblance of normality amongst the chaos of a war-torn city. 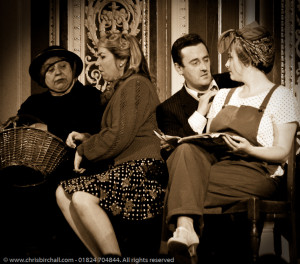 The spiv, the gravy browning tights, Spam fritters and sing-a-longs in the air raid shelter were all woven into the story of how a typical family coped with their fear and their losses.  It was played out by the 17-strong cast with humour, pride and emotion, bringing laughter and tears in equal proportion.  Some are well known in Merseyside’s theatre-land, others not so (to me anyway), but they all worked together seamlessly as they unfolded the tales of tragedy and torment. 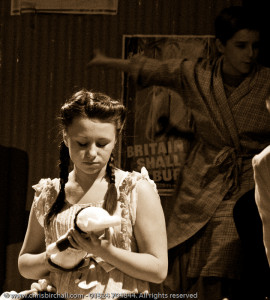 Two names that I am sure are destined to become very well known in the future are Eleanor Guy and Jordan Burke.  These thirteen year-olds played the parts of Emma and Charlie brilliantly with a convincing mix of fear and bravado that you would have expected of youngsters going though those times.

If I’m honest my favourite type of night-at-the-theatre is one that leaves my sides splitting from laughter or my head swimming with songs.  That said, although this was neither comedy nor musical, I did thoroughly enjoy Red Skies. 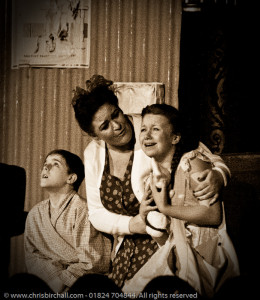 ny criticism I have, would be largely aimed at the choice of venue.  Don’t get me wrong… St George’s Hall has an absolutely magnificent interior but the marble pillars, statues and lavishly gilded ornamentation did not lend itself at all to scenes meant to be set in wartime living rooms and air raid shelters.  The sparse scenery, props and furniture were lost against the lush golden backdrop.  So much so that I decided all of my photographs would be made as sepia monochromes with the background rendered as dark as possible to concentrate attention on the wonderfully expressive faces of the actors and actresses.

The acoustics of the hall too, were more suitable for the choral or orchestral events that I’m sure the venue hosts with great success.  Some of the quieter spoken lines were barely audible in parts of the auditorium.

So there we have it.  Whilst suitability of the venue only got four out of ten from me, the production, cast and script scored a respectable eight.