Scouse of the Antarctic

You know it’s Christmas when…? 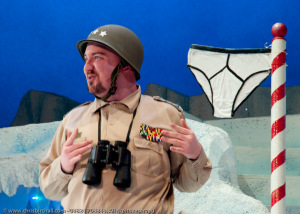 You know it’s Christmas when you are sitting in the Royal Court Theatre waiting for the curtain to go up on their Christmas show.  That’s when you know it’s time to get into the spirit of Christmas!

And so it has been for me for the past six years.  For it was when Merry Ding Dong first hit the stage running at the Royal Court in 2009, that I realised there was something very special about this very scouse style of Christmas show. 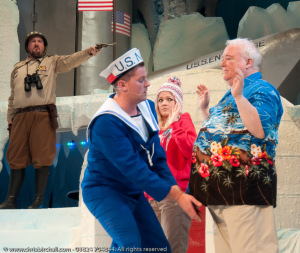 Unlike the regurgitated pantomimes that are presented at practically every theatre in the land, the Royal Court commission a brand new Christmas show every year, tailored specifically for their target audience; for their loyal following that expects a particular style of show, steeped in bawdy scouseness.

Merry Ding Dong was the first of these shows to flow from the pen of Fred Lawless, a scouse writer, who at the time was exiled in darkest Todmorden.  And although Fred was living in the land of the wrong coloured rose, he knew exactly what sort of humour would go down well with the Royal Court’s adult Liverpool audience.

The show was a resounding success. So much so that before it’s extended run had finished, Fred was commissioned for the following year’s Christmas show.  And so it has been for the past five years. 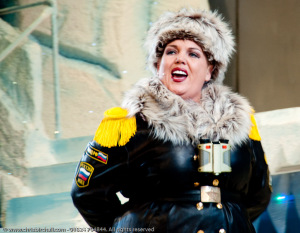 In 2010 he transported his scouse characters far from their homeland in Scouse Pacific and then to the U. S. of A. for Little Scouse on the Prairie.  Next, the plot returned home for Nightmare on Lime Street,  and last year the story was really out of this world with the Hitchhiker’s Guide to Fazakerley.

Returning earlier this year to live in his home city of Liverpool following the sad loss of his wife and soulmate Tilly, Fred immersed himself in the creation of his sixth Royal Court Christmas show.

This one tips a jaunty hat, very loosely, to the celebrated naval explorer Robert Falcon Scott and his ill-fated expedition of discovery to the coldest part of the planet. 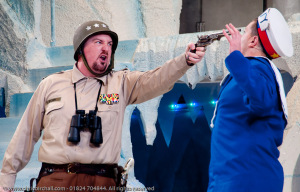 Scouse of the Antarctic tells the tale of a native of Wavertree who had settled at the North Pole (Yes I know the Antarctic is the South Pole, thank you. All is revealed in the story).

Jimmy, played by Michael Starke, was quite happy sharing his sub zero home with the odd (very odd) penguin, an even odder foul-mouthed talking snowman and a pair of sex-starved joint-smoking polar bears.  That is, until the arrival of Daisy (an adventure-seeking student played by Hayley Hampton),  followed by the arrival of two submarines from opposite sides of the iron curtain. 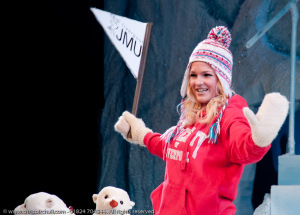 The American commander Brad (John McGrellis) and his Soviet counterpart Olga (Lindzi Germain) each desperately needing to stake territorial claim over the frozen wastelands, found themselves up against the solidarity of Jimmy, Daisy and the two Polar Bears, Jason and Kylie, who also happened to be scouse.  Not only that, they were all Everton supporters  Coincidentally, just like the play’s writer!

Worse still, they each had to deal with the incompetence of their respective right hand men, Kowalski and Bolokov.  Both characters were played amazingly by Liverpool Institute for the Performing Arts graduate Michael Fletcher, due to the fact George Clooney had (apparently) been otherwise detained at the Penny Farthing pub around the corner!  If his remembering to use the right accent at the right time (most of the time) was impressive, then the fight scene between the two characters was simply sublime. 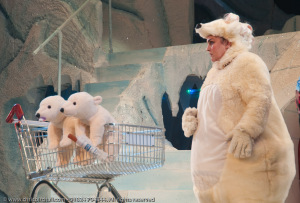 The script was nothing short of brilliant and, under the stage direction of the theatre’s former musical director Howard Gray, delivered brilliantly by the entire cast, made for a superbly polished, fast moving, laugh-a-minute comedy.

The music was fantastic – all played on stage by four musicians tucked away in the igloo.  And Lindzi’s singing in particular was nothing short of superb.

Michael Starke and Lindzi are regulars at the Royal Court.  Michael Ledwich and Helen Carter, who played polar bears Jason and Kylie, were making a return visit. John McGrellis in the role of American submarine commander Brad was making his Royal Court Debut, as was Michael Fletcher.  And whilst it was Hayley Hampton’s first time on stage since graduating from the Liverpool Institute For Performing Arts, she is on familiar ground, having worked as a waitress at the theatre during her student years.

Hayley’s acting and singing were so impressive, I doubt you’ll ever see her serving at the tables again. 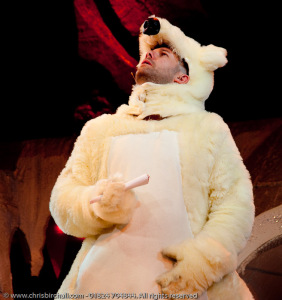 Every year I have wondered what Fred Lawless and the Royal Court production team, headed up by Kevin Fearon, could possibly come up with that would top the previous year’s offering – yet every year they do just that.

This year is no exception.

Scouse of the Antarctic runs until January 17th.

It is one of the funniest shows you will have seen this year. It’s hysterical. It’s bonkers. It’s absolute comedy madness. You really mustn’t miss it.

I can’t bring myself to give it any less than 5/5 stars.