Scouse Pacific at the Royal Court 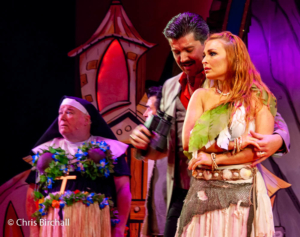 Did you sit at home last night, watching the drivel that passes for televised entertainment?

Well let me tell you… in the heart of Liverpool, at the city’s Royal Court Theatre, there is an Island you will Love, a whole cacophony of chair-turning Voices and more Factor-X that you can shake a stick at.

My ears are still ringing from the most exquisite covers of iconic songs from the likes of Queen, Michael Jackson, Bonnie Tyler and so many more. The performances were so tight that if you ignored the cleverly altered lyrics, it was easy to imagine that you were at some fantastic gig. Whereas in fact, this was one of the funniest comedy shows you are ever likely to see, presented in the unique ‘scoused-up’ style that this theatre does so well. Contemporary musical theatre at its very best. 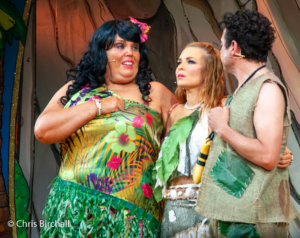 When you pair up the likes of writer Fred Lawless with director Bob Eaton, you have the makings of a great show. Throw into the mix a great musical director such as Howard Gray and you have a full, tight sound emanating from the pit, that belies the fact it contained only four musicians. Add to all this, a colourful set and a talented cast with some magnificent voices, and you get a tightly-knit company that kept the energy and comedy going without a pause from curtain up to curtain call.

Scouse Pacific is a very loose parody of Rogers and Hammerstein’s similarly sounding 1950s musical. But don’t expect to hear “Some Enchanted Evening” or any of the other original songs. For other than one line from “Bali Ha’i”, which was changed to “Childwall Valley High”, all the music was up-beat rock and progressive pop from the seventies through to the present day. 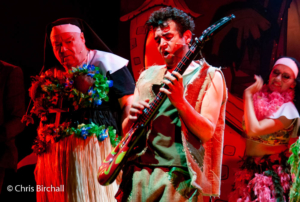 The story unfolds about a tropical island paradise, incongruously inhabited by a family of scousers, whose Liverpudlian ancestor was washed up there following a shipwreck.  Head of the family Terry (Jake Abraham) educated his wife and daughter (Lindzi Germain and Jamie Clarke) through the medium of scouse: “ya know warra meeen la?”

It transpires the haven is being taken over for commercial gain by evil capitalists, Roger Burke and Richard (Dick) Head, played to perfection by Stephen Fletcher and Guy Freeman.

There were so very many memorable moments, but for me the highlight was the full six-minute version of Bohemian Rhapsody. It wasn’t real life. It was a fantasy – and the entire cast contributed to this hilarious full-length, three-part parody, during which they rightly acknowledged the wonderful musicianship of Mike Woodvine as he rose to his feet in the pit, wearing a Brian May wig, as he performed the guitar solo with the expertise of the master himself. And I’m sure, had Freddie Mercury been looking down from beyond The Gods, he would have been well impressed. 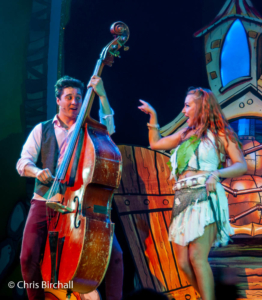 Young Jamie Clarke, playing the love-interest Donna Marie, demonstrated how she has blossomed, not only as an actor but as a vocalist too, with a flawless rendition of the Bonnie Tyler classic “Total Eclipse of the Heart”.

Song after song had feet a-tapping and the cleverly crafted comedy lyrics had jaws aching from laughter.

Magnificent performances were delivered too by Royal Court legends Jake Abraham, Lindzi Germain and Michael Starke, the latter of whom trans-gendered into the irreverent Sister Mersey, alongside her fellow sexy nuns, played by Abigail Middleton and Mia Molloy. 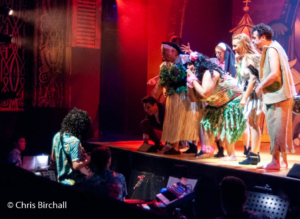 The action was non-stop, and you no sooner finished laughing at one gag before the next got your ribcage rattling.

Half-way through the show, I remember thinking: “if this doesn’t get a standing ovation, I’ll run around the auditorium dragging people to their feet myself”. In the end, I didn’t have to. Press Night audiences are notoriously hard to please but tonight they were on their feet in an enthusiastic display of appreciation, dancing in the aisles and singing along to the finale and encore songs.

If it were possible to give Six Stars out of Five, I would. Do yourself a favour and get your tickets booked. You’ve only got until August 10th.