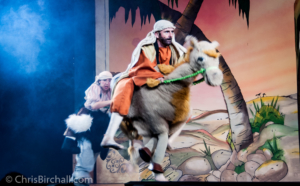 Forget everything you ever read about The Nativity.

History has been re-written. And this time, the writers and soothsayers have even out-trumped the American pussy- ̶g̶r̶a̶b̶b̶i̶n̶g̶ footing president’s re-defining of the significance of Jerusalem.

The Scouse Nativity has to be the most controversial, and the most hilarious telling of that two thousand and eighteen year old story. And, it has to be said, probably no less accurately than the multitude of previous “official” versions of that particular fairy tale. 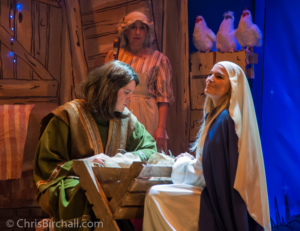 The beautiful Hayley Hampton excelled in her role of the virgin mother Mary, with the singing voice of an angel.

The voluptuous Lindzi Germain dominated the stage – or at least the air space above the stage – as she flew in and out of the plot as the fixer Angel Gabriel, and into our hearts as the brilliant comedy actress that she is.

Completing this unholy trinity is the clumsy, comical, charismatic Keddy Sutton, who had us in stitches in her role a the hapless Lil, and captivated us with her spontaneous musical impressions of Cilla Black. 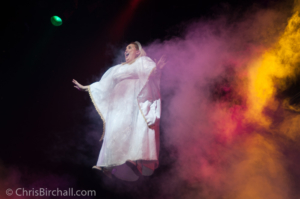 All credit to Kevin Fearon who, in writing this his second Royal Court Christmas show, has maintained and built upon the unique style of “adult panto”  created by Fred Lawless seven years ago.

Credit too, to director Cal McCrystal for interpreting the script and feeding it to the seven laughter-hungry actors; and to impresario Howard Grey, who’s musical direction can transform standards onto new hilarious Royal Court magical musical standards. 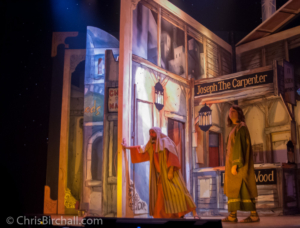 have to say, the set design is one of the best ever. It’s the first time I have ever seen a huge “pop-up” book on stage, with the actors themselves turning the pages as the story progressed.

From such fabulous performances, it seems almost wicked to pick out any one favourite. But if I had to nominate my ‘man of the match’ it would be Drew Scholfield for his portrayal of an unholy Jeremy Kyle in the final scene.  There wasn’t a dry seat in the house.

And if you are not a ‘theatre-goer’, do go and see this play. You will be converted.

The Scouse Nativity gets a resounding FIVE STARS from me.

Amy Wadge at The Clwyd Room Her Benny