The evening’s entertainment began with a young man (presumably a staff member going off duty) wheeling his bicycle out from the kitchen area, past our table, as we struggled to eat a luke-warm Sunday Roast.

And it’s not as if this was a back street McBurger place (not that it would have been excusable in any eatery). No, this was the first-floor restaurant in a much-hyped establishment on Liverpool’s Hope Street.

Luckily, things hotted up once we moved across the road from “The Pub” to “The Hall”. 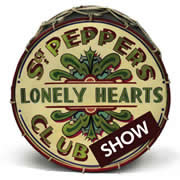 Last night at the Philharmonic we and the other 1,600 or so members of the audience were treated to magical trip back in time. This was no mystery tour. We knew what to expect.

We just didn’t expect it to be so good!

Billed as a “stunning new note-for-note production” , it was precisely that.   The first half of the show was – as the title suggests – the Sgt Peppers album from start to finish.  And it was note for note.  And they did sound like the Beatles. Right down to the rolling crescendo in A Day in the Life. 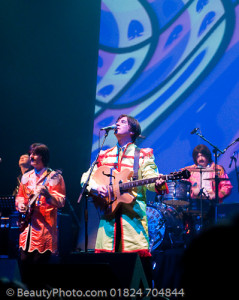 Not only that; as they walked onto the stage, in the dimmed light and recreated smoky club atmosphere, and when they picked up their instruments, an involuntary chill of excitement spread through my body.  These guys looked like the Beatles too!  Not so much facially (apart from the John who I swear just has to be Julian’s love child!) but more in the way they walked and stood and in their attitude.

Right from the very first note, I was right back in the seventies.

There must be thousands of Beatles Tribute bands world wide.  One of my favourites was Californian band The Tearaways who appeared at last year’s Mathew Street Festival.  But these guys last night are as close to the real thing as you can get without a time machine.

Apparently all Liverpool lads (I’m yet to learn their real names), this was essentially their first gig together.  It was the first performance in a fourteen date tour that ends at the Lowry in Manchester on the 12th March.  And that, coincidentally, is the nearest to Liverpool of all the remaining venues. 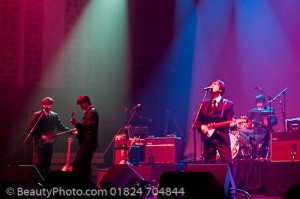 What makes these guys so good is the fact they have taken the “tribute” aspect very seriously.  Many bands try to get it right and when they can’t, they put their own interpretation on the original music.  Back in the day, my own band did Beatles covers.  No way could I ever sound like John so I didn’t try.  My version of  “Twist and Shout” was very different.  Still shouted, yes, but very different.

Heck, even the original artists rehash their original releases.  I’m sure when Paul McCartney himself performed at the Philharmonic recently, his rendition of the older Beatles tracks had been brought both up-to-date and more in keeping with his ageing vocal chords.

But last night’s show was not about “up-to-date”.  It was about the Sgt Pepper’s era and beyond.

After the break, this John Paul George and Ringo combo gave us classics such as Blackbird, Baby you can Drive my Car, and a resounding finale that was Hey Jude.

In short they got it right. Right down to the authentic costumes, the right guitars (John’s Rickenbacker and Paul’s Hofner – albeit a right-handed version!), the right band members singing the right songs. The right attitude. They had a slightly uneasy stage presence, tempered by cheeky scouse cockiness – just like the early Beatles appearances – probably because this was their first gig. But that added, rather than detracted. 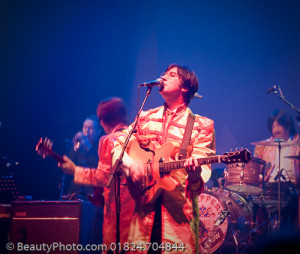 If I had to choose, I would say The John Lennon character was the most like his alter ego. Cleverly, he set his microphone too high – just like John did.  And when he sang you really did think you were listening to Lennon – right down to the chilling and prophetic whispered “shoot-me“s in Come Together.

I’m sure these four lads and their two backing musicians were nervous.  After all they where playing to a crowd who loved the Beatles and they were doing so on the Beatles home turf.  They needn’t have been.  For they pulled it off magnificently.

I just know we are going to see a lot more of The Sgt Pepper’s Lonely Heart Club Show.!