Something About Simon – Gary Edward Jones at Theatr Clwyd 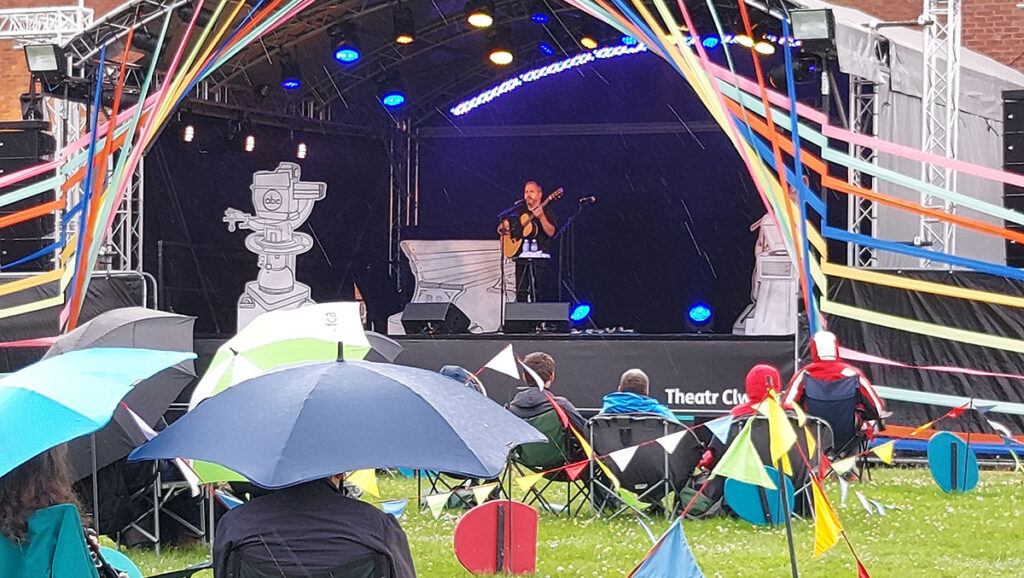 Last night I sat in the pouring rain to watch a gig.

“We nearly didn’t bother because of the weather” remarked the guy in the adjacent pod (which is the fancy name Theatr Clwyd gave for a chalked-out two-metre square plot on the grass) “but we’d heard that he’s good”.

He looked surprised when I remarked that this was our fifth or sixth time watching the show. I could have gone on to explain that not only is he good, every time we’ve watched Gary Edward Jones perform his “Something About Simon” show it has had something different to offer.

Yes, the anthology, the timeline and the anecdotes remain consistent, as do many of the songs; especially those that relate directly to the key points in Paul Simon’s career. For instance, Fifty Ways to Leave Your Lover refers to Simon’s turbulent relationship with Carrie Fisher, and Homeward Bound will always be inextricably linked to Widnes Railway Station. Interestingly, Gary’s spiel about this song supposedly having been written on that railway platform blows that theory completely out of the water.

The fact remains, there are so very many brilliant songs in Simon’s back catalogue, that Gary can regularly update his setlist with almost infinite combinations. 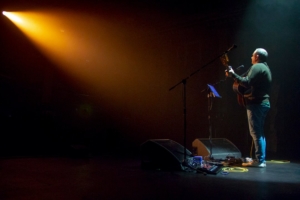 Much has been written about Gary Edward Jones’s ‘Something About Simon’ journey, about how he studied Paul Simon’s unique style of Travis picking and mastered the technique to perfection, and I’ve said many times that the only person who sounds more like Paul Simon than Gary, is Paul Simon himself!

Despite the rain, Theatr Clwyd’s open-air show did not disappoint. It was just so good to experience real live music again after 18 months of hiding from Covid. There is nothing to beat an intimate gig, shared with just a hundred or so attendees, where you can see the whites of the performer’s eyes, pick up the subtle inflexions, and even witness him swallowing a fly, six bars into a song.

The atmosphere was like that of a mini-festival, with the British summer weather adding authenticity. Gary had the good grace not to rub it in by singing Kathy’s Song, which begins with “I hear the drizzle of the rain” but it wouldn’t have mattered anyway.  We were there to soak up the ambience and enjoy the brilliant music.

Hats off to Theatr Clwyd for creating this outdoor performance area where gig and theatre-goers can enjoy shows ahead of the full lifting of restrictions relating to indoor events.