Sons of the Desert at the Royal Court

Roy Brandon and Michael Stark are Stan Laurel and Oliver Hardy reincarnated! They have the acting ability to take on the persona of the characters and to replicate the timing, attitudes, and all the little nuances that contribute to Laurel and Hardy’s special brand of humour, and to top it all, are dead ringers for the comedy duo. This pair of home-grown actors are pure gold. 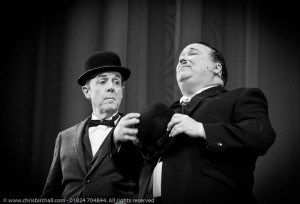 Their fame spread, leading to a world wide demand for their stage shows, and in 1953 they made their third and final personal appearance in Liverpool, where Bernard Delfont put them on at the Empire Theatre. 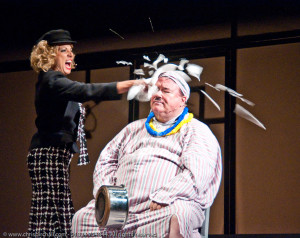 Now, eighty years after the release of the film, Sons of the Desert has come to Liverpool as a stage show.  And this is not just any old stage show, for the wonderful team at the Royal Court Theatre have pulled off the world premier in that it is the first ever stage adaptation of any Laurel and Hardy film.

As usual, the Royal Court production team put a great deal of thought into the casting, not only for this, the “main feature”, that took up the entire second half of the show, but also for the music hall style cabaret sketches that preceded the interval.

Matt Connor, who has done everything from Othello to Coronation Street, and Johathan Markwood (from Taming of the Shrew to Eastenders), were well suited to “camping it up” for these sketches, on addition to providing much  of the musical accompaniment. 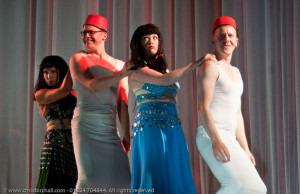 Equally Lori Haley Fox and Penelope Woodman did a divine job in “vamping up” the song and dance routines in addition to the serious …hang on, I’ll rephrase that …the seriously funny task of playing Stan’s and Ollie’s wives.   Picking at random from both actresses list of credits; Lori appeared in both the original London and the Broadway productions of Mamma Mia!, as well as the film version.   Penelope has done everything from Macbeth to Mother Goose and recently in the BBC’s Lecacy of Reginald Perrin.

When it came to casting the roles of Stan and Ollie it was a no-brainer.  For right on the doorstep were two Royal Court regulars, both brilliant comedy actors in their own right, who bounce off one another, who have the acting ability to take on the persona of the characters and to replicate the timing, attitudes, and all the little nuances that contribute to Laurel and Hardy’s special brand of humour. 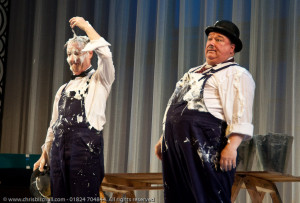 To top it all, it is difficult to miss the fact that Roy Brandon and Michael Stark are dead ringers for the comedy duo.  Stan Laurel and Oliver Hardy reincarnated! This pair of home-grown actors are pure gold.

In a clever move, the first half of the show is given over to music hall style sketches.  In addition to being very entertaining in their own right, this served as a way of breaking-in the audience to what – let’s be honest – is the old fashioned style of humour through which the story of Sons of the Desert would have to be told.

There may well have been a temptation there to contemporise the script with a re-write to please today’s more sophisticated audiences. As it was, they followed the original script faithfully, right down to the often misquoted “Well, here’s another nice mess you’ve gotten me into!”, which actually got its own round of rapturous applause!

In essence, we ended up seeing two shows for the price of one – all woven tightly together by director Ken Alexander and musical director Howard Gray. 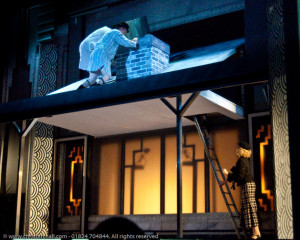 The stage design was superb. The way it transformed via pulleys and hinges as Stan and Ollie climbed from the living room, upstairs, into the attic and finally on to the roof was nothing short of genius!

This really is a “must see” show.  I fail to see how even the staunchest Laurel and Hardy fan could fail to be impressed with Roy and Michael’s characterisation of their comedy heroes.

Son’s of the Desert runs at the Royal Court, Liverpool until October 26th 2013

Shamed by your English? Holey Guitars