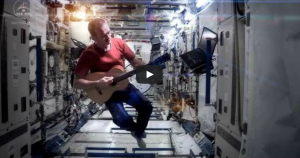 It’s not very often a reviewer gets to say “This is Out Of This World” and really mean it.

And I’m sure David Bowie has never before listened to a cover of one of his songs and thought “I wish I’d done it like that”! I refer, of course, to the setting not the vocal rendition.

With over a million YouTube hits in the first 24 hours, Commander Chris Hadfield is set to become an internet sensation with his recording of Bowie’s Space Oddity filmed and recorded on board the International Space Station.

And this is no amateurish karaoke type performance by someone who shouldn’t give up his day job.  Whilst it may not be chart-busting, this is a fairly respectable cover with Hadfield singing and playing guitar in outer space whilst still attending to such tasks as keeping himself and the billion dollar space station in good working order.

All the takes and video lips were beamed back to earth where they were put together with “Terra firma” backing by professional musicians.

Canadian astronaut Chris Hadfield is scheduled to make his return trip to Earth later today after five months aboard the International Space Station.

(14th May 2014)  The video has been removed from YouTube due to the end of a 12 month licencing agreement with David Bowie.

You can read about the latest situation here