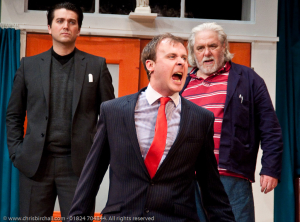 If you are a teacher, or a parent, or someone who feels there is a lot wrong with education funding or the general state of the nation today, then Special Measures is a must-see play.

If you are one of the above who also enjoys a rib-cracking comedy, then Special Measures is especially for you! 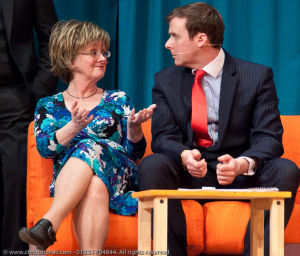 Set in the fictitious St Jude’s Primary School in the wake of a damning OFSTED report, Special Measures is not so much about the classroom, more about class wars. It is an indictment to the way funding cuts are affecting our schools and about the obscene way politicians fraudulently make expenses claims that amount to more than a teacher’s salary. It is about the spin and the sleaze and the gross injustices, and all that is currently wrong with the state of the nation.

But don’t make the mistake of thinking this is a dark and heavy play, weighted down by boring politics.  Writer Mark Davies Markham, a former teacher himself, knew what he had to do to get his point over to a Liverpool theatre audience.  He knew that to vent his political frustrations in The Royal Court, the venue he first discovered at a Kraftwerk concert back in 1981, he just knew would have to wrap it up in the sort of comedy for which the theatre has become renowned. 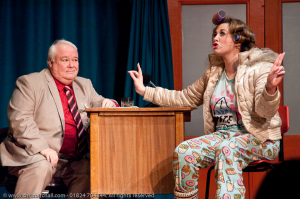 Let’s put it like this: If you prefer your politics more Spitting Image than Question Time, more Not the Nine-o’clock-News than Newsnight, then this play will be right up your street.

In casting the show, the Royal Court team had a wealth of home-bred talent to choose from.

For Mr Ed the headmaster, Michael Starke (Brookside, Corrie and a long list of Royal Court credits including Sons of the Desert and Bouncers) was a natural choice as was Paul Broughton (Brookside, Liverpool One and Billy Elliot).  Paul played the militant, barely “anger managed”, teacher Keith.  Both are first class comedy actors in their own right.  But give them a script laced with scouseness and issues close to their hearts and they will make it sing, dance and bounce off the auditorium walls.

For the man behind Reverend James’s dog collar, Stephen Fletcher (Emmerdale, Heartbeat and the Liverpool Nativity) was made for the part.  Nice to see Stephen at the Royal Court again, taking time out from his busy schedule running the Liverpool based Life in Theatre Productions. 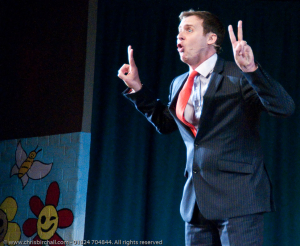 Another Brookside graduate, Eithne Browne plays teacher Grace. Eithne has trodden the Royal Court boards many times and famously played the lead role in Willy Russell’s Blood Brothers on its transfer to the West End. She is a mistress of comedy and never fails to please.

It was the casting of the part of the aforementioned smarmy MP, Thomas Winters, that caused the producers to look further afield.  After all, actors with the right accent and mannerisms are harder to find in Liverpool than a Sun reader at Anfield!

They came up trumps with Colin Hoult, having dragged him up from darn sarf where he has been preparing for a part as a regular character in the new series of Derek on Channel 4.  A brilliant stand-up comic, Colin has also had a string of acting roles on TV including Benidorm and Red Dwarf.  He played the reviled MP so convincingly he has already become the character Royal Court audiences love to hate. 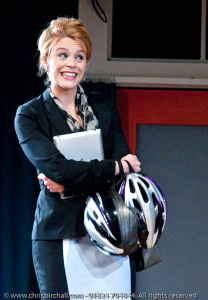 Another new face here this month is Jessica Guise who plays the MP’s beautiful yet much maligned sidekick Holly Jones. Jessica has played theatres up and down England, Scotland and Wales as well as TV parts in the likes of Casualty.

The “them and us” scenario played out beautifully with all the actors bouncing effortlessly off one another. The story was fast moving with each one-liner coming almost before  the previous one had finished, especially in the first half before the teaching staff  had fully appreciated the true purpose of the MP’s visit.

The comedy continued in part two, but was tempered by the more political hot potatoes and it was great to see the audience making their feelings known about the issues being brought up. At this stage any Tory politicians in the audience would have been well advised to keep a low profile!

All credit too, to director Ken Alexander who, along with these talented actors, truly did justice to Mark Davies Markham’s excellent script.  I especially liked the way that the actors  themselves quickly changed the set’s props and furniture between scenes whilst performing a zany comedy dance to music and disco lighting.  The dance and the music had absolutely nothing to do with the script – but it somehow worked!

Special Measures is a brand new play written for today, not as often happens, a classic brought up to day with rewrites.  It is poignant, thought-provoking and hilariously funny.  Do take your own special measures to see it before the run ends on May 3rd.  Tickets are available from just £12.

Oh my Lorde – she’s been Photoshopped! Paul Carrack at Llandudno