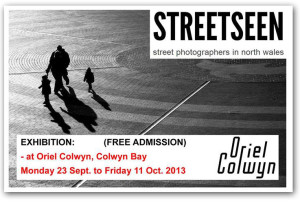 Street Photography is a genre of photography that strives to document life “as it is”.  Back in the early days of the first hand-held 35mm cameras, exponents of the art soon learned that their split-second snapshots of people going about their business could tell far more than words could ever do.

Back then it was the likes of Henri Cartier Bresson and Robert Doisneau who first realised that their “blink of an eye” observations could be captured forever in the blink of their Leica’s shutters.  And it transpired that the public at large soon developed an insatiable appetite for what was to become better known as documentary photography.

Whilst the newspapers concentrated on reportage with photographs that reported and illustrated events or occurrences, often featuring newsworthy people of notoriety or celebrity,  magazines such as Life and Picture Post were launched to showcase these wonderful glimpses of real life.  Ordinary people, like you and me, going about our daily routine.

In recent years we have seen a resurgence in what has now become popularly known as Street Photography. And back at the start of this year, three North Wales photographers got together to collaborate on a Street Photography project.  They established StreetSeen – a website to present and share their observations.

Photographers Ann Muth, Roy Barry and Graham Kidd each have an individual and distinct approach to what is a challenging form of photography.  And now, after a nine month gestation, they are mounting their first exhibition in collaboration with the Oriel Gallery at Theatr Colwyn, on Abergele Road in Colwyn Bay.

Admission is free, and the exhibition runs from September 23rd until October 11th.  It is well worth a visit – and who knows, you might even find yourself featured in one of the pictures!