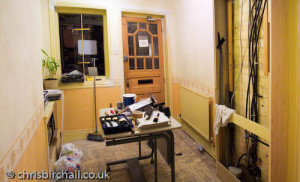 So tell me – how DO  they do that on TV’s 60 Minute Makeover?  Jayne and I have worked out we’ll be hard pressed to finish this little lot in 60 days!

Although we did get the ceiling painted in the shop/reception, most of today was spent on preparation.

Up came the carpet.  Three years ago it was a good idea.  Unfortunately, inconsiderate people kept walking all over it!  Next the underlying vinyl came up.  That  was a good idea ten or so years ago.  Sadly, after six or seven of those years it was…  well.. so “last decade”!

Our choice for 2008?  Well, just as it is probably about to go out of fashion: LAMINATE FLOORING!!

You see:  the ceremonial dumping of our shop floor covering finally heralded the end of our love affair with “The Carpet”.   In reality, that love affair ended quite some time ago.  We were only staying together (the carpet and me) for the sake of the children (carpet mites!)  eeeeooo!

Now not a single thread of Wilton, Axminster, nor even the naughty-but-nice shag  pile, now remains in our home/studio.  The rest of this lovely old Victorian building has original floorboards – some restored to their former glory – some (many) awaiting said restoration.  Our lounge had a concrete floor before we transformed it with the laying of real  floorboards.  Sadly we can’t afford/justify the cost of doing the same in the shop – so laminate  it is!  Good old B&Q.  Good old… well… old !  (10% off for the over sixties on Wednesdays!!  🙂 )

A Comedy of Errors (DIY style)

Now those of you who have laid laminate flooring will know you have to leave a small gap all around for expansion (doesn’t real wood expand too?!!)  and that you cover that gap with a piece of beading glued to the skirting board.  Ugly!  So instead I decided instead to remove the old skirtings and fit new ones (wood stained) after laying the floor, thus hiding the “gap” naturally.

Now those of you (where did I hear that before?)  who have removed skirting boards will know that it is quite a simple procedure.  You just pull one end: and pop!, pop!, pop! – out pop the half a dozen or so nails holding it in place.  Easy!

We are talking stud walling here.  That’s a 3×2″ upright every sixteen inches.  And this skirting board was attached to each and every one of those uprights with no fewer than two 2″ chisel headed (now rusty) screws, countersunk and lovingly filled with plastic wood to conceal their very existence!  The two minute “skirting board removal” turned into a three hour nightmare!  I had to saw the skirting either side of the fixings and remove several 14″ sections of skirting before I could even get near the bits which my dear Dad had attached for life.  Did he think the skirting board was going to fall off and hurt somebody!!??   Thank goodness for the Black and Decker Scorpion.

There was much swearing – just like my Dad taught me when I used to help him by holding the bits of wood he was attacking in his work shed at the old family home (The Drovers).  Yes, he would have been really proud of me today.

Bless him, I do miss him still – and I wouldn’t mind betting he was smiling today as he looked down upon my efforts from wherever he now is, most certainly, a “spiritual joiner of repute”