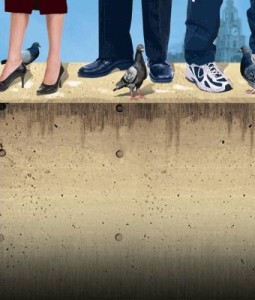 We’ve just enjoyed another great night out in Liverpool.

The evening began with a nosh at the Everyman Bistro. Who cares if it’s like sitting in a school canteen – the food was brilliant. Loads of vegetarian choices and lots of gluten-free dishes too. (It truly is the mark of a good, caring, restaurant when they acknowledge the one in fourteen of us who are veggies and the ever growing number who are medically intolerant to wheat). The atmosphere in there was great too. And it was interesting ear-wigging Matthew Kelly and his chums on the next table!

Our theatre tickets, however, were for elsewhere. So we left the Matthews Rixon and Kelly to perform their Endgame at The Everyman and walked back into the city centre.

Alan Bleasdale penned On The Ledge some fifteen years ago, and has rewritten parts of this black comedy for it’s current airing at the Royal Court Theatre.

It is set three stories up END_OF_DOCUMENT_TOKEN_TO_BE_REPLACED

Brick up the Mersey Tunnels

The last comedy we went to see was Alan Ayckbourne’s Bedroom Farce at  Venue Cymru in Llandudno.  And a farce it was too – but not in the sense the producers intended!  We walked out of the poorly acted production well before half time.

Last night was very different.  It was a last minute decision to go and see Brick up the Mersey Tunnels and boy, are we glad we did!

The only seats left were in the front balcony at Liverpool’s magnificent Royal Court Theatre (a real theatre as opposed to the characterless “boxes” they build today).  The high viewpoint didn’t impair our enjoyment one bit.  The wonderful scouse humour on stage was at times matched by the heckling as the story unfolded about the cultural divide between the Wirral and Liverpool.

Jaws were well and truly aching by the end of the night.  this was a wonderfully wicked comedy.  Catch it if you can.