Just ignore the date of this post –  it’s nearly Christmas!

Well at least it was last night in Liverpool’s theatre-land where Night Collar was enjoying its second airing in eighteen months.

A second but much shorter airing, running for just two instead of the four to six weeks that is usual for comedies at the Royal Court.

Maybe they were unsure whether the comedy would work so obviously out-of-season.  To be honest, I had expected it to have been rewritten to take place during the summer months.  After all, with the exception of the reluctant Santa, none of the of the characters were particularly tied to the festive season.  The Elvis impersonator, the prostitute, the naked stag-night victim, the tranny and the warring drunken couple could be typical punters for any scouse cabbie on practically any weekend of the year.

That said, a lot of the one-liners had been brought bang up to date and the play was very funny.  It was almost a packed house – good for a Thursday – and raucous belly laughs were in abundance. 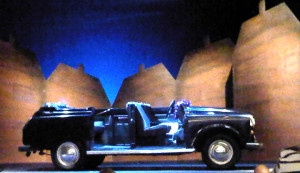 Former Brookside actor Louis Emerick did a fine job throughout, portraying the cabbie, as did Eithne Browne playing a brash prostitute one minute and a poignant cancer sufferer the next.   Danny O’Brien had a small part as the naked reveller (well it was supposed to be cold 😉 ) but to his credit he did play it large. He also turned his hand equally well to playing the tranny and a Jack-the-Lad character.

But for my money the Royal Court Oscar went jointly to Linzi Germain and Alan Stocks whose portrayal of the drunken husband and his equally drunken ‘woman scorned’ was nothing short of brilliant! They were so so funny – and oh so believable!

We see  so many badly-acted drunks on stage and screen but Alan in particular is always very convincing.

In fact I later mused that the only time I’ve ever seen him sober is at the bar after the show!

To sum up:  As far as “Royal Court” comedies go, it didn’t disappoint,  and yes, I would recommend anyone who enjoys a good laugh to go and see it.  I just wish that, having decided to stick with the Christmas theme, they had taken the bull by the horns and gone to town on the scenery and stage set to inject a real Christmasy feel to the night.  One of the best Christmas parties I  ever attended was actually held on a summer solstice night – so it can be done!

* Please excuse the quality of the mobile phone pic (no cameras allowed in the auditorium). My dropped hints about going to dress rehearsals for some decent shots have fallen on deaf ears up to now!

See also on the Daily Post and Liverpool Echo websites