The Flags at half mast at the Royal Court 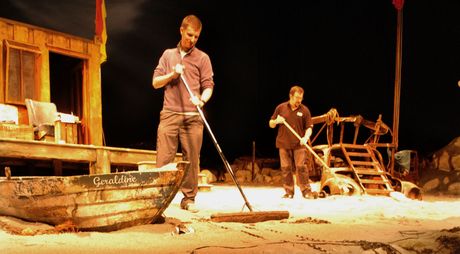 The set for the “The Flags” is impressive.  Almost as imaginative as the grassy knoll created for the indoor outdoor pop festival “Eight Miles High” last summer.  Over ten tons of sand was shipped up from Cornwall to construct the beach scene for the Royal Court Theatre’s current presentation.

That, unfortunately, is where the comparison ends.

Certainly for the first forty minutes of the show, the red flags were definitely flying. Prophetically so. That beach was a definite no-go area!

The last five minutes of the first half were rescued – just – by the talented and likable Andrew Schofield as he and his “lifeguard” partner bungled an attempt to resuscitate the woman they had just dragged from the sea only to jump for joy as the “kiss of life” practice dummy they had brought out for a quick refresher course, was seen to be breathing!

That scene was a moment of masterful comedy and during the break I had high hopes the play would gain some momentum. Sadly, that was to be the only real bit of entertainment in a production that received but a luke-warm reception from the first-night audience.

So where did it all go wrong? Why was it that, in this synagogue of scouse humour, a show starring one of Liverpool’s finest comedy actors should have been such a flop?

The answer lays in the question.  It wasn’t scouse humour, it was Irish humour – acted with bad Irish accents.  I was sat “at the water’s edge” and yet there was much of the dialogue I couldn’t properly comprehend due to the rushed presentation.  Much of the subtle humour was completely lost on me and indeed most of the Royal Court Audience.

Can the show be saved?  Well yes.  Even at this late stage, if they were to drop the Irish accents and set “The Flags” on a Merseyside or Lancashire beach and let Andrew Schofield do what he does best. Let him be scouse. And the rest of the cast too. Then Yes.  The Flags could see out its four week run with some dignity.  It could be done It really could – even at this late stage.  If the directors had the courage to make these few simple changes, they could turn this thing around. And think of the publicity they would receive for making such a brave decision! 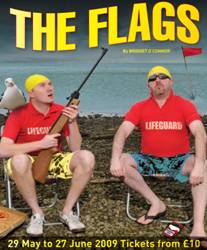 As it stands, however, I cannot find it in me to recommend The Flags to anyone.  And that saddens me.  For since I first discovered this magical theatre some eighteen months ago, this is the first time I have come away disappointed.

(Half scouse, living in North Wales)