The Hitchhikers Guide to Fazakerley

Fred Lawless has done it yet again. Just when you think he’ll never come up with anything to top last year’s Christmas offering, he switches to warp factor nine and gives us a show that is out of this world! 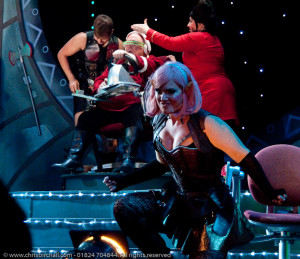 Had he not gone to explore the Galaxy from “the other side” back in 2001, I wonder what Douglas Adams would have thought of the present offering from those spaced out folks at The Royal Court?

To be honest, he would probably have loved it.  After all, his own writings for the various incarnations of The Hitchhiker’s Guide to the Galaxy were a series of disjointed, unfathomable, cryptic sketches sewn together to form the basis of the the most important question ever asked by mankind, the answer to which was …erm …42!

Fans of Douglas Adams, however, might view this play from a different perspective. They certainly won’t find any more answers to the Ultimate Question of Life, the Universe, and Everything, for apart from the first four words in it’s title,  this play bears little resemblance to Adams’s ex terrestrial adventures.

Granted it involves space travel, but there is no Arthur Dent, no Marvin, no two-headed Zaphod Beeblebrox and no Ford Prefect. 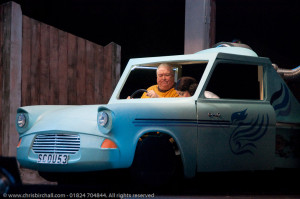 There is a Ford Anglia however, as well as a Tardis Police Box, an R2D2, numerous Spock Ears and a multitude of gadgets, phrases, costumes, sets and scenarios borrowed from Star Trek, Star Wars, and just about every other outer space Ski-Fi you’ve ever been back to the future to see.  The flight deck of the Venusian space ship, for instance, is very like the Starship Enterprise but with fluffy dice in the windscreen!  Oh, and you’ll need a Babel Fish if you’re not fluent in scouse.

So what exactly is The Hitchhiker’s Guide to Fazakerley?  Well if I had to sum it up in just one word, it would have to be… Bonkers!

That is how Jayne described it during the break and it really is totally and utterly bonkers. But in a good way.  When she said those words she still had tears of laughter rolling down her lovely cheeks.

Basically, writer Fred Lawless has done it yet again. Just when you think he’ll never come up with anything to top last year’s Christmas offering, Nightmare on Lime Street and the previous three, Little Scouse on the Prairie, Scouse Pacific and Merry Ding Dong, he switches to warp factor nine and gives us a show that is out of this world! 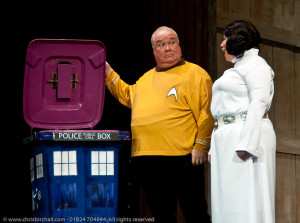 The plot begins in Fazackerley in the back yard of the recently deceased Billy Smith.  His son Marty and daughter in law Sandra (played by real life husband and wife Michael Stark and Lynn Francis) are  gathered there with their son Young Billy, played by Jack Rigby, to hear Billy’s last wishes in terms of where his ashes were to be scattered.

Their surprise at hearing he wanted them scattered on the planet Venus is nothing to their surprise when they learn that Billy’s lost weekends “tinkering in his shed” had involved modifying, not a Delorean, but a Ford Anglia, to undertake inter-galactic space travel.

The zany story unfolds with oodles of Boom-boom style one liners, lots of slapstick, purposeful over-acting, and slickly choreographed dance moves.  The show is peppered throughout with some great songs – all of them having a connection, however tenuous, to space travel, and all of them delivered brilliantly by each and every member of the cast, under the expert guidance of musical director Howard Gray.

There are the obligatory heavenly bodies in the shape of the Space Girls Charlotte Dalton, Stephanie Miles and Emily Trebicki, who sang and danced delightfully throughout the show.

When the earthlings landed on Venus, they encountered Thing and Thong. Lindzi Germain’s larger than life comedy acting and epic singing voice formed a powerful and dominant character in her main role as Thong – and she made a pretty terrifying Venus Fly Trap too! 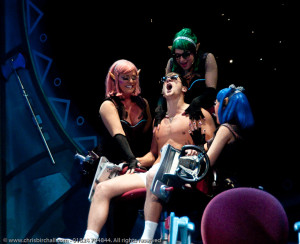 The love interest in the story develops when the starry eyed Thing, played by Angela Simms falls for Young Billy. It happens so quickly, you’d have thought she’d never seen man before, which actually makes sense when you remember that women are from Venus and men are from Mars! Anyway, long distance relationships rarely work, especially when the lovers live light years apart. So will Thing come to live on Earth or will Young Billy astrally emigrate to Venus?

All in all, Hitchhiker is destined to become yet another success and will be loved by anyone who enjoys a good laugh and a flight of fantasy.  All credit to the production team under director Ken Alexander, the costume designers and the set designer Nigel Hook and his team – especially for the way they made that Ford Anglia fly!

The entire cast were brilliant.  As regulars treading these boards, Lindzi, Michael and Lynn’s knowledge of what your typical Royal Court audience wants, is an absolute asset to any play performed in this wonderful old theatre.  It is Angela Simms’ second appearance here. She’s a damn good up-and-coming actress with expressive eyes and a cute face (even without the pixie ears) and I’m certain we’ll be seeing a lot more of her.

All in all, The Hitchhikers Guide to Fazakerley gets a 9 out of 10 from the Hairy Photographer.  Catch it before January 14th. I guarantee you won’t regret it. You can find ticket information on our Events Guide.