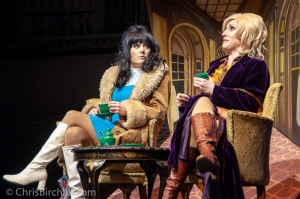 If, like me, you were a fan of the 70s sitcom “The Liver Birds”, you would most likely watch the Royal Court’s new musical comedy “Liver Birds Flying Home” and be expecting much of the same. You know what I mean: Same old sit (uation), same old com (edy), only with more mature actors playing Beryl and Sandra.

Far from it. This play is all that and so much more.

The writers have taken Carla Lane’s original characters, and the circumstances in which they were embroiled when the last episode aired in 1979, and speculated upon the paths their lives might have taken over the ensuing forty seven years. 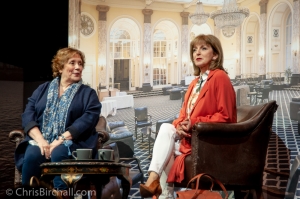 Knowing there were two actresses playing the 1970s Liver Birds (Lucinda Lawrence and Nichola Munns) and with Lesley Molony and Joanna Monro playing their present day characters, I naively imagined act 1 would be set in the past and act 2 in the present.

Instead, as the story of their lives unfolded, the two eras were cleverly presented on stage pretty much simultaneously, thanks to some extremely skilful directing and very clever scene changes. Not to mention the inclusion of some fine songs reflecting both eras. 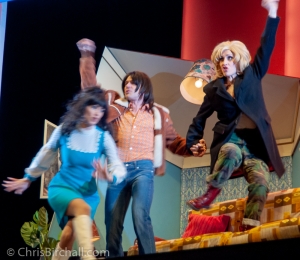 It was a tale of friendships, misunderstanding and betrayal. The older birds eloquently  portrayed how people embellish the truth about their lives and how the past has a way of coming back to bite you, whilst the younger birds effortlessly painted a picture of life in an era before they were born, in a manner that Nerys Hughes, and Polly James would no doubt approve.

Whilst the ladies were all doing their thing, actor Mark Rice-Oxley worked a hectic schedule in and out of wardrobe and make-up to play the male characters from both eras.

To sum up, this is a fab musical with a super story line, great gags and lots of nostalgia.