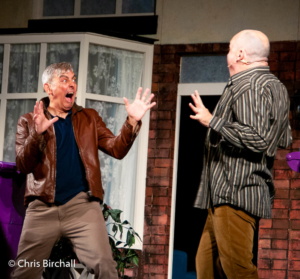 I knew better than to expect your usual murder mystery format as I took my seat in Liverpool’s lovely art-deco theatre. Yes there was a murder, yes there was a mystery, but it was all stirred together in that pot of scouse comedy for which The Royal Court is renowned.

The plot revolves around ‘chalk and cheese’ neighbours in a Liverpool suburb. Trish and Eddie, are an ordinary couple in a humdrum marriage and with a daughter just moved back home with a male Uni friend in tow.  Next door is the recently wed Martin and Greta, still brimming with a passion that masks Greta’s black widow tendencies. 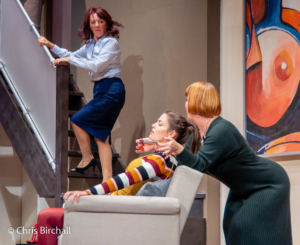 There were some absolutely stonking performances from all six actors, not least from Royal Court regular Paul Duckworth, who played Eddie.

One of my favourite scenes was when Martin (played by Liam Tobin) was preparing to pass himself off as a long-lost cousin. Trying out different accents, his Irish was acceptable, his Scottish quite convincing but when Greta bade him try the Welsh accent, he just launched into song with the audience bizarrely all joining in the chorus of “My My My Delilah”. 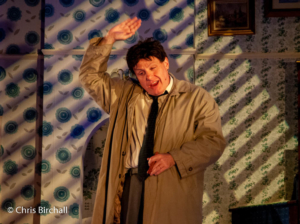 The Menlove Avenue Murder Mystery is the theatre’s third production from the pen of prize-winning playwright Gerry Linford. We recently saw Yellow Breck Road, and before that, “The Miracle of Great Homer Street” which gained a Highly Commended award on the 2017 Hope Playwriting Prize. 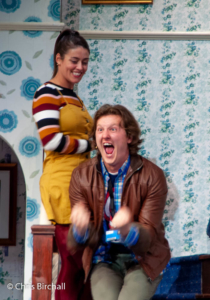 I think it is fair to say that Gerry has quickly identified the tastes of the Royal Court theatre-goer and is serving up the sort of comedies that satisfy their appetite.

I look forward with anticipation to Gerry’s next offering.  Meanwhile, don’t let The Menlove Avenue Murder Mystery pass you by.  It runs until the 21st of September, so get your tickets now: https://liverpoolsroyalcourt.com/whats-on/the-menlove-avenue-murder-mystery/