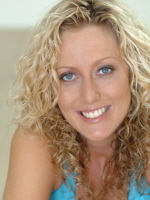 Cynics might suggest my main reason for being at Liverpool’s Royal Court Theatre last night was to ogle Suzanne Collins’ long slender legs.

Well that’s because they only think they know me.  I am of course, ever appreciative of a shapely pair of pins, but I’m also a sucker for a good serving of raucous scouse comedy.

And that was my main reason for attending the second-night performance of  Drew Quaile’s The Salon.  Two and a half hours of having the lovely Suzanne cavort in a very short beautician’s tunic just a few feet from my seat in the stalls, was just an added bonus. 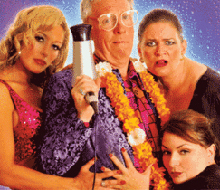 On all counts, the evening definitely did not disappoint.

An hour before curtain-up, Jayne and I enjoyed an excellent meal served at our table in the Royal Court’s unique “cabaret-style” stalls.  Good honest simple fayre, beautifully prepared and presented. Fantastic quality, especially when you consider they serve 150 meals in forty-five minutes! A nicely chilled bottle of rosé from the theatre bar was the perfect accompaniment.

Then within seconds of the lights going down there was non-stop laughter throughout the entire performance.

Set in the “Curl Up and Dye” salon, the play give a hilarious insight to the entwined love lives (and the lack thereof) of the hairdressers, beautician, and their customers  and revolves around the break-up of the salon’s two gay owners.

Other than that, there was no real story-line as such.  But then, none was needed.  In fact there was no room for one.  Quail’s script was bursting with humour and innuendo.  And under the genius direction of Bob Eaton, the cast delivered some of the funniest performances I have seen.

Lynne Fitzgerald was hilarious as the scissor-happy brazen hussy and Roy Brandon’s portrayal of an hysterical love-forsaken queen was a magnificent combination of drama and slapstick.

And the acting in late-night drunken scene was so convincing, I actually found myself worrying that the actors might end up falling off the cleverly constructed elevated stage that was the apartment above the salon.

Can I recommend it?  Absolutely!

If anybody can find fault with this terrific comedy, they’d be splitting hairs.  Go and see it for yourself and I promise you, it’s your sides that’ll be splitting!

A shortened version of my review can be found on the Liverpool Echo web site.