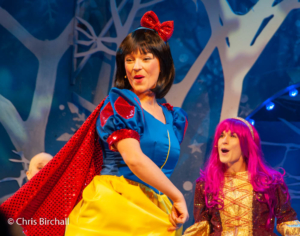 Cool costumes of colourful cotton and silk. Wraps of ermine and mink. Voluminous bosoms and tight PVC jumpsuits, As far as pantomimes go, what’s not to like!

Then there’s comedy of course. It wouldn’t be a pantomime without it and The Scouse Snow White has comedy and slapstick in bucketloads.

Barely two minutes in, however, it becomes apparent what it is that sets apart a Royal Court pantomime from all the others. You can forget about your namby-pamby double entendre, at this theatre they go straight for the jugular. This is very much an adult panto, hence the program’s strap-line “Don’t bring the kids”. 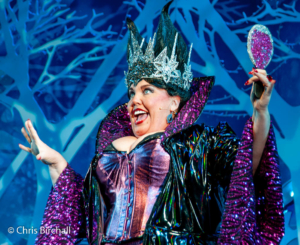 The storyline very loosely follows the traditional tale. There is the Evil Queen, portrayed magnificently by the wonderful Lindzi Germain, and there is a poisoned apple, or in this case, a manky apple which Snow White consumes with hilarious Mancunian consequences.

There are no dwarfs in this show but everybody was feeling happy as the cast sang and danced to the wonderful music provided by the four-piece on-stage band.

Classics such as “Material Girl”, “Money Money Money” and “Uptown Girl” (with suitably altered lyrics) kept the story moving along, with that master of comedic timing Andrew Schofield joining the dots in between as The Narrator . 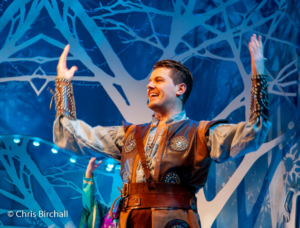 The singing throughout was excellent and when Michael Fletcher, who plays the Huntsman, sang Elton John’s “Don’t Let The Sun Go Down On Me”, he fair brought the house down. 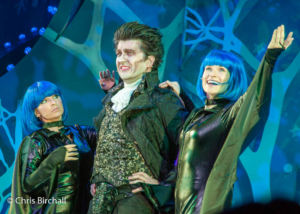 Samantha Arends, Jamie Clarke and Hayley Sheen – respectively, Nana Dwarf, The Genie and Snow White – provided the svelt glamour as well as fun, magic and the love interest. It has to be said that the entire cast worked as one, like a well-oiled machine, putting on a show that was lively and kept the audience in stitches from start to finish.

The Scouse Snow White runs until January the 18th, but don’t get complacent, The Royal Court Christmas shows invariably sell-out. We’ve already booked to see this Five-Star show again in January. Get your tickets whilst you can!