…we were having a dull day out in Stratford. 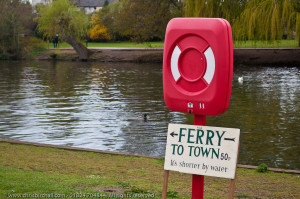 When I say dull, I’m referring of course, to the weather not the company.  I have to say that otherwise there’d be no supper for me tonight!

The car park was quite a walk from the town but a sign said “It’s shorter by water” so we took the fifty pence ferry across the Avon, which might have been nice on a warm bright day. 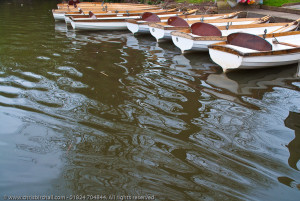 Actually, it wasn’t just the weather that was dull.  I also found Stratford-upon-Avon itself rather dull – quite probably in total contrast to the opinions of the thousands of tourists who flock there every year.

Yes it’s got history.  Some poet/playwright bloke used to live there apparently and I’m sure there are many places of interest and culture for those who seek them out.  But the town itself, quite frankly, was a mess.  Of course there are some fine examples of Shakespearian architecture but a lot that have not been so very well preserved.  And much of the newer building within the town centre is totally unsympathetic and appears to have been done with no thought for heritage.

Then we tried to eat…!  I’m sure there were some nice quaint tea rooms and cafés but they were kept well hidden – or perhaps condemned to oblivion by the BuggerKings, WhereTheGreasySpoons, and PizzaHovels.  The fact we are vegetarian, of course  made matters a whole lot worse!

We found Café Rouge.  It looked nice and the menu in the glass case boasted a fine selection of omelets – just right for lunch.  We had to wait a while for a table to come free but at least we weren’t pushing and shoving along the pavements.  We eventually sat down and ordered, only to be told “Sorry we don’t do omelets”.  When I pointed out that omelets were on the menu by their door, the waiter shrugged his shoulders and said, unapologetically, that it was an old menu!

Five more minutes of pushing and shoving and we found a promising little Italian place, sat down and ordered our omelets.  Jayne ordered a cup of tea too, which arrived shortly afterwards …in a take-away style corrugated paper cup unceremoniously plonked on the table!  I said we were eating in and had ordered food. First she looked puzzled and then said “Would you like it in a cup”.  Two minutes later an empty cup was plonked on the table alongside the paper one!  We walked out of this little bit of Italy leaving the little Italians to do what they would with their tea and their omelets!

Hamming it up and pinching the bum

The next place we tried was also Italian but these were a totally different breed.  Welcoming, quaintly charming in an Italianate kind of way (by which I mean the handsome waiter looked almost ready to pinch Jayne’s bum) …and very helpful when we explained we were vegetarian.  For the third time in an hour we ordered omelets.  Unfortunately my mushroom omelet turned out to be ham and mushroom.  Full of apologies, and with another sideways glance at Jayne’s bum, he whisked it off to get a replacement.  It came quickly and was, in all fairness, delicious. Best of all the waiter insisted on only charging me for Jayne’s meal.  One of the advantages, perhaps, of having a wife with a pinchable bum!

Either way, I’m not in any hurry to go back.

We stayed in the Cotswolds that night and found a lovely pub with a warm welcome. But somebody really should have told foxy that it had been a dull day.

The Four Executioners This day in 2008..

On this day in history..., Photography Talk

On this day in history...

Just Pictures, On this day in history...