Written and directed by Liverpool actress Lynne Fitzgerald, the story centres around a birth. Not quite a seasonal virgin birth, but nevertheless one that was not anticipated by the father whose time spent in prison has been a touch longer than the usual gestation period. 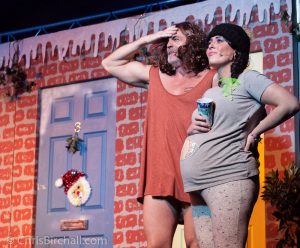 Hapless escaped convict Jay (played by body-builder Ronnie Orr) has escaped from Walton Prison to be beside his desperate scousewife in time for the birth of the child she is carrying.  And much to the delight of the women in the audience, Ronnie’s physique figures quite prominently on stage when you consider his character appears to have absconded from prison immediately after stepping out of the shower!

Playing the part of Vanessa, actress Charlie Griffiths carries her full-term theatrical ‘bump’ remarkably convincingly, and the birth scene – complete with ‘selfies’ – is one of the funniest things I’ve ever seen! 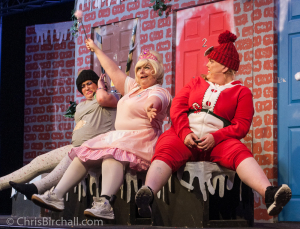 Charlie and the other three desperate scousewives, played by Lynn Francis, Lindsey Germaine and the show’s writer Lynne Fitzgerald execute their roles superbly, with all the fast-moving hilarity, pushing, shoving and door slamming of a latter-day farce.

In addition to playing the residents of numbers one to four, these talented ladies change character twice during the show.  First as deaf, daft and batty pensioners and then, in total contrast, as a bunch of ne’er-do-well hoodie-wearing teenage lads up to no good in the back streets. 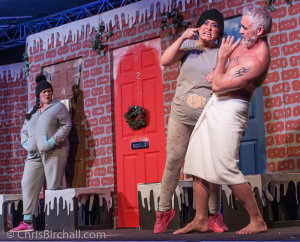 The play is a masterclass of character acting that will have you in stitches.  And that final scene – in which Vanessa gives birth, aided by the quite desperate midwives – is guaranteed to have your sides splitting!

Now in its third season, word is getting around about the Desperate Scousewives shows and it was heartening to see all the performances completely sold out at New Brighton’s Floral Pavilion.

The Desperate Scousewives are set to return to the Floral Pavilion on Thursday 14th July with Desperate Scousewives 3- “THAT MOMENT YOU REALIZE!”,   It’s a brand new comedy full of abrasive Liverpool wit written by Lynne Fitzgerald and tells the tale of Susan (Lynne Fitzgerald), Vanessa (Charlie Griffiths), Gayle (Gemma Brodrick) and Donna (Jenni Cartwright) and their hilarious Summer capers.