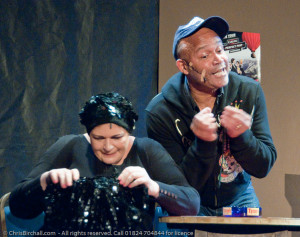 There are one or two good plays coming up on the local theatre scene and one you mustn’t miss is Two.

Now if that sounds like gobbledegook, I should explain that Two is the name of an excellent Jim Cartwright play that just opened  in Manchester and moves to Liverpool at the end of the month.

So what I was really trying to say in my opening paragraph was that whatever else you see at the theatre you really should go to Two too!

Oh dear, it gets worse, doesn’t it! I suppose I should be grateful that nobody  was wearing a ballet outfit because a tutu really would have been two tos too many!

Ok. Enough of the puns. This really is an excellent play that lends itself perfectly to the intimate atmosphere of a studio theatre. 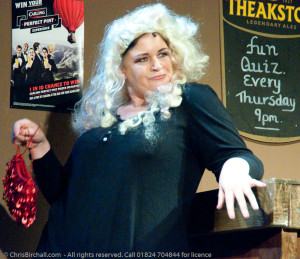 The story is set in the bar of a public house and provides a glimpse into the lives of the landlord and his wife and a dozen of their “regulars”.

All fourteen characters, five of them being couples, had personalities as diverse as you will find on any evening in any town pub.  And one of the things that makes this play so entertaining is the fact they are all played by just two actors!

Actors will often tell you how they have to work at “getting into character” for any new performance – well these two had to “get into” fourteen different characters throughout the entire performance!

They did it brilliantly and convincingly. Lynne Fitzgerald moved effortlessly from being the downtrodden barmaid to a fiery redhead to the obsequious victim of a bullying boyfriend. And her portraytal of the blonde lush would have you believing that the bar really was stocked with copious amounts of alcohol!

In the opening scene Louis Emerick was the struggling Mancunian barman, putting on a cheery face for his punters whilst hiding a sad secret. The characters he played on the other side of the bar however, alternated between a flirty Jack-the-lad, a sad elderly Jamaican lamenting his fast ebbing years, a vile wife-beating control-freak, and a couple of hapless dimwits.  My personal favourite was the woolly hat wearing simpleton who’s ramblings as he and his equally simple girlfriend watched a cowboy film on the pub telly just cracked me up. 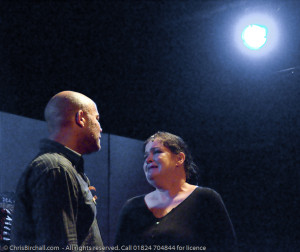 Both played their various parts so convincingly you almost forgot there were only two actors in this play.

Producer Michael Silver decided on an approach that was somewhere between a full stage set with all the props and the bare stage mime approach that was the intention of the play’s writer. In my opinion he got it just right. Not having to interpret mime and imagine the setting, allowed the audience to fully appreciate the character acting and enjoy the wonderful humour to the fullest.

As funny as the play was, Two has its dark side too.  There were parts that shocked and made you feel more than a little uncomfortable. There were sad parts too, filled with emotion.  It is testament to these two talented Liverpool actors that they carried out every aspect of this black comedy to perfection.

Two runs at Stageworks in Walkden, Manchester, until the 17th September before moving to The Actors Studio Liverpool on the 21st

Do yourself a favour – don’t miss it!

Some photographs from the show