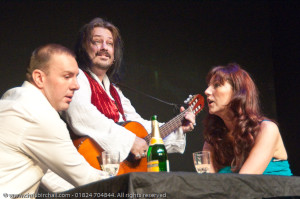 When Liverpool comedian Stan Boardman wrote a song about footballer’s wives, “I Wanna be a WAG”, he felt there was more mileage in the idea than it being just a three minute bit of fun on YouTube. So he set about expanding it into a full-blown stage musical.

WAG – a Musical premeired last week with a three night run at the Unity Theatre.  All three performances sold out in no time at all, so the run was extended for a further three performances over at the Actor’s Studio in Seel Street. 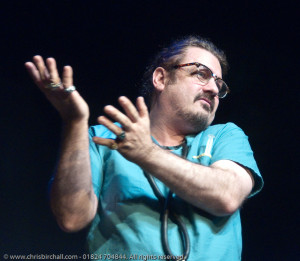 It was here that we got to see this play that plotted a young girl’s rise from working behind a checkout to marrying a famous footballer.

It was one of the first roles for fledgling actress Helen Massey and she carried off the part well.  Her character typified the archetype in Boardman’s song “I wanna be a WAG, Jimmy Choos and a Gucci bag, a 4×4, a Mini and a Jag”

There were some very funny moments as the storyline took us through visits to night clubs, fashion hot-spots, botox clinics and the seedy offices of a (very) plastic surgeon. Well, more of a jobbing boob-jobber really! 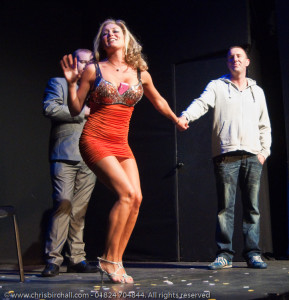 But Plain Jane’s world really fell apart when her newly-wed footballer husband fell for the sensationally sexy delights of Randy Mandy, played by Suzanne Collins who has herself blossomed since she played the plain-Jane type character Nikki Shadwick in Channel Four’s  Brookside up until its last episode in 2003.

WAG – a Musical is a great first play that deserves a bigger budget production.  It would be good to see it performed with live music instead of singing to backing tapes and to have the glamorous WAG lifestyle portrayed with proper scenery and props at a more main-stream venue.

And after this very successful first airing that was completely sold out at the Unity… Who knows?