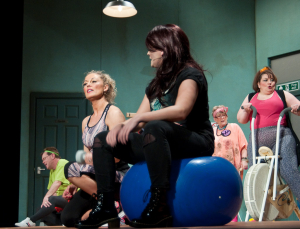 When it comes to fitness the Mo-tivators gym is the worst gym in the world …but the best place for belly laughs!

And there are laughs aplenty in this comedy at the charming little Epstein Theatre on Liverpool’s Hanover Street. Written by Ed Waugh and Trevor Wood, the play is set in a health and fitness club where everyone seems to have a healthy appetite and the fitness routines include running out for pizzas and lifting really heavy chunks of cake! 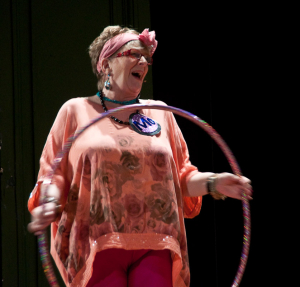 The only person actually losing weight is Donald (Andy Ford) who is shaping up to make a move on gym owner Maureen, played by Pauline Daniels, who also directed the show.

There are several mini storylines woven into the script. Jackie, played by Lynne Francis, is eating her way through a failed marriage whilst trying to keep her goth sister Whitney on the straight and narrow.  Emma Lisi plays the part so well, it’s hard to believe she doesn’t actually live the life of a goth outside the theatre! 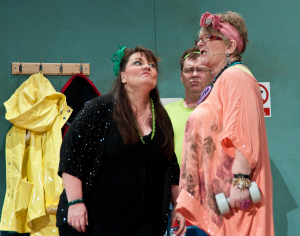 Lynne Francis and Pauline Daniels, both seasoned comedy actresses with a string of theatre, film and TV credits to their names, keep the fun, frolics and fabulous one-liners flowing throughout the play.  As does Andy Ford whose 30 years of stand-up made him the perfect choice for the part of Donald. He reminded me of a cross between Jim Davidson and Alan Carr, but without the Concord teeth, as he minced around the stage. 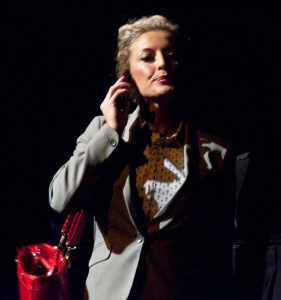 The villain of the plot was the scheming Sophie – a reality TV show researcher with a hidden agenda. This “posh totty” character was cleverly portrayed by the beautiful Suzanne Collins who has trodden the boards in Liverpool and far beyond since her acting debut as Nikki Shadwick in Ch4’s Brookside. During this time she’s totted up an impressive list of film parts too.

This was a fun play that proves you can have your cake and eat it too. The talented cast kept the slapstick and humour flowing seamlessly with lashings of fun and frolics.

Waiting for Gateaux is on at The Epstein Theatre until Saturday May 2nd.