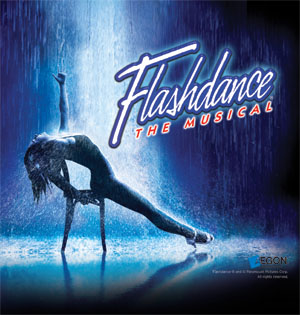 The fluffed lines; the songs that don’t quite start on cue; the odd microphone that doesn’t work…

On that basis alone, I suppose I should have been disappointed – but I didn’t have time. From the minute the curtain went up, a faultless performance transported me back to the eighties.

Back to the day I fell in love with Irene Cara.

Last night I relived that famous water scene as she flicked her head sending jewel-like back-lit droplets cascading across the stage and then during the dance academy audition scene where in exquisite slow-motion she glided through the air.  Epic movie moments.

Except that last night, at the Liverpool Empire, it was Victoria Hamilton-Barritt who performed the part of Alex  – and I think I just fell in love all over again.

Flashdance the Musical was every bit as good as the film – and I’ve watched that film a good half dozen times over the past twenty five years. Last night the choreography (by Arlene Phillips) was magnificent.  And the songs – I’d forgotten just how many great songs – were  performed perfectly by the vibrant, energetic young cast.

They received a tremendous ovation from from the packed first-night house.

Hmm.  Maybe after publicly declaring my love (albeit stage love) for this 2009 Alex, I doubt Jayne would let me go again!

As well as the beautiful Victoria Hamilton-Barritt, the 20-strong cast is headed up by Berine Nolan, Noel Sullivan (Hear’say) and Bruno Langley (Coronation Street’s Tod Grimshaw).  The show runs at the Liverpool Empire until 31st January before continuing its UK tour.