There was a time, before titanium, aluminium, steel and plastic, when cameras were made out of wood.

Here we see a fine example featured on the Early Photography website, from one of the best of the original makers, Gandolfi. It was folding camera called the Imperial, beautifully fashioned out of brass and mahogany with extreme precision. Originally introduced in 1899, it remained on sale well into the 1970s.

The early wooden cameras were originally used with glass plates and eventually, cut sheet film held in “dark slides”.  These were light-proof film holders that had to be loaded up in the darkroom.  Once inserted into the camera, a light-proof sheath was withdrawn allowing the light to reach the film once the shutter was fired.

Although large format cameras have remained in use right up to the present day, during the 30s and 40s the trend for “miniaturization” using roll film and eventually 35mm film in cassettes, lead to cameras being mass produced relatively cheaply in materials other than wood. 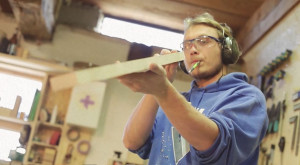 Now Slovenian designer and woodworker Elvis Halilović is turning the whole thing on its head.  For whilst the world of photography has been becoming more digitized and miniaturized, for the past seven years Elvis has been making lensless pinhole cameras fashioned out of chestnut and maple. 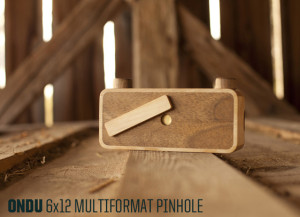 For the uninitiated, a pinhole camera uses a pin sized hole instead of a glass lens to produce an image, creating effects that no conventional camera can achieve.  All of Elvis’s cameras feature a pinhole, precision drilled to conform to the focal length of the camera, ensuring consistent exposures and superb image quality. The beauty of pinhole photography is that unlike the “instant results” digital photography offers, and with the absence of a viewfinder or preview screen, you can never know exactly how the final result will turn out until the film has been developed.

Watch the video to see these beautiful cameras and hear Elvis explain how the project came about.

You can find out more about this project and also the unique way is is being funded by visiting the ONDU website.