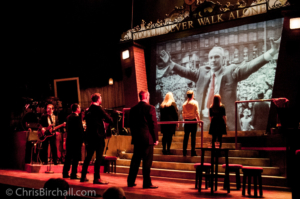 Well that was emotional…

I can’t even say I’m a huge fan of football, but when they sang “You’ll Never Walk Alone” in the show’s final minutes, a lump came to my throat and a little dampness to my eyes. It gave me an insight to what the atmosphere must be like on The Kop when Liverpool win a major match.

In fact you could hardly hear the voices of the actors on stage, despite them being ‘miked-up’, such was the passion of the voluminous singing from the packed auditorium. Virtually everyone in the audience was on their feet. 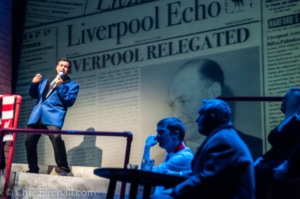 YNWA  is a fascinating play about what is arguably the most famous football club in the world, documenting its 125 year history from 1892, when it was founded by J.K Holding, to the present day under the managerial hand of Jurgen Klopp.

Coming from the pen of Liverpool playwright Nicky Alt, the story’s highs are told with passion and humour and its lows, with empathy and dignity.  The talented cast did the script proud under the direction of Howard Gray who handled the emotive issues of the Heysel Stadium disaster and Hillsborough sympathetically, poignantly and without sensationalism.

The club’s history was told via songs from each particular era, with some of the actors doubling up as members of the on-stage band. 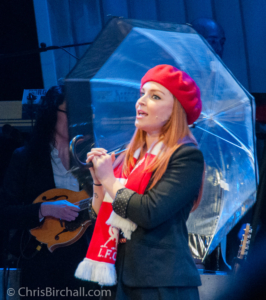 Regardless whether their off-stage allegiances were Red or Blue, the “team” performed and sang with the kind of skill and gusto Klopp instils into his footballers.  In the line-up were several of the theatre’s regulars, including Mark Moraghan, Lindzi Germain, Jake Abraham, Lenny Wood, and it was great to see the lovely Jamie Hampson back in the same role that marked her Royal Court stage debut when the play was first aired here five years ago.

All in all this is a fabulous play. Very entertaining, very funny and, at times, very emotional. I spotted some real tears during the telling of the dark days of ’89.  I’ve already talked about  the passion and pride felt during the finale as the whole auditorium joined in a rousing rendition of the song now synonymous with Liverpool F.C. and which gave its name to the title of this play. But when two of the football club’s legends Alan Kennedy and Phil Neal emerged stage right, brandishing the European Cup, the already established standing ovation erupted to almost take the roof off this lovely, recently refurbished, Roe Street venue. 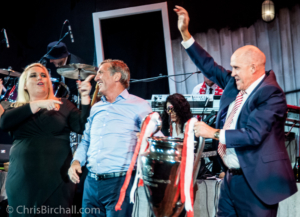 You’ll certainly never walk alone through the doors of the Royal Court Theatre this month, because between now and October 29th you’ll be joining the ranks of thousands of avid Liverpool F.C. fans.

Tickets are from £15 and if you  book a seat in the stalls you can opt to be served a meal before the show for an extra £12. And as a bonus on Saturday 14th October, you can also watch the Liverpool vs Manchester United match live on the big screen.

YNWA gets the full five stars from me.

Something About Simon Amy Wadge at The Clwyd Room